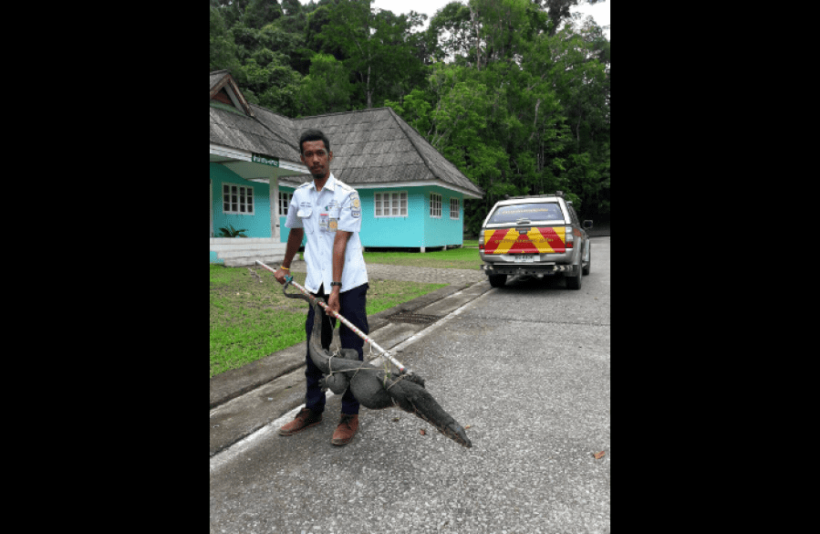 PHUKET: A 10kg monitor lizard was released into a forest after it was found in a foreigner’s house in Thalang yesterday.

“We received a request from the owner of the house to help catch the lizard in Baan Suan Neramit 5, Srisoonthorn sub-district. When we arrived, it was hiding somewhere in the house,” said Pongpan Juanan of Kusoldharm Foundation.

“It was quite a big one, so we had to prepare the right equipment first. It took us about 30 minutes to capture it,” he added.

Pongchat Chuapom of the Khao Phra Thaeo Wildlife Sanctuary revealed that the creature was a varanus salvator, commonly known as the ‘water monitor lizard’.

Rescue workers later released it into a nearby forest.

“During the rainy season, dangerous creatures may leave the forest and enter peoples’ homes. I advise everyone to be careful and to lock all windows and doors, especially if your house is located near a forest,” said Mr Pongpan.

“If you do find a cobra, monitor lizard or any other potentially dangerous creature in your house, please don’t attempt to get rid of it on your own. Our helpline, 076-246301, is available 24 hours a day,” he added.

Carcass of 10-meter whale washes up at Phuket beach