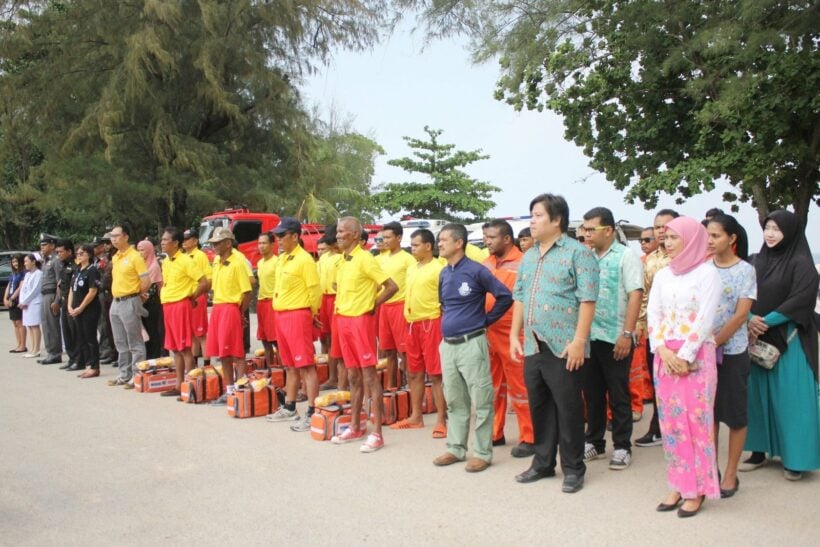 Phuket’s Governor Plodthong, together with an armada of local authorities and media, hosted an opening ceremony for the operation of Thalang Beach Lifeguards on April 5.

“There are a lot of tourists that drown or get harmed from accidents in the sea every year because they either don’t understand the red flags, can’t or don’t read the warning signs, the sea conditions off Phuket’s west coast or sometimes simple don’t listen to the warnings from local people and lifeguards. Reports of drownings affects the image of the island and the overall tourism industry in Phuket. The lifeguard project in Thalang will help ensure the safety and build the trust among beachgoers in the area,” said the Governor.

Meanwhile, the Deputy Secretary of Phuket OrBorJor, Satien Kaewpraprab, said that the 34 lifeguards are expected to work at 5 beaches across Thalang including Surin Beach, Bangtao Beach, Naithon Beach, Naiyang Beach and Maikhao Beach.

This is just a drop in the ocean trying to address Phuket’s lifeguard shambles. The annual ‘negotiations’ between a perfectly professional and experienced local contractor was a sideshow argument between passionate people on both sides – the OrBorTor and the Phuket Lifeguard Service. It came to a head late last year when the negotiations broke down and the OrBorTor decided to put the contract out for tender. When no one tendered the Accountants put together their own version of a lifeguard service. Not surprisingly it was a mess.

What followed is months of misfires, poor decisions, a few hasty photo opportunities and, sadly, more drownings. As we head into the 2018 wet season we hope that this Thalang initiative is a proper attempt to provide vital lifeguard services for the growing tourist numbers flocking to the island in traditional low season – the most dangerous time of the year for swimmers.