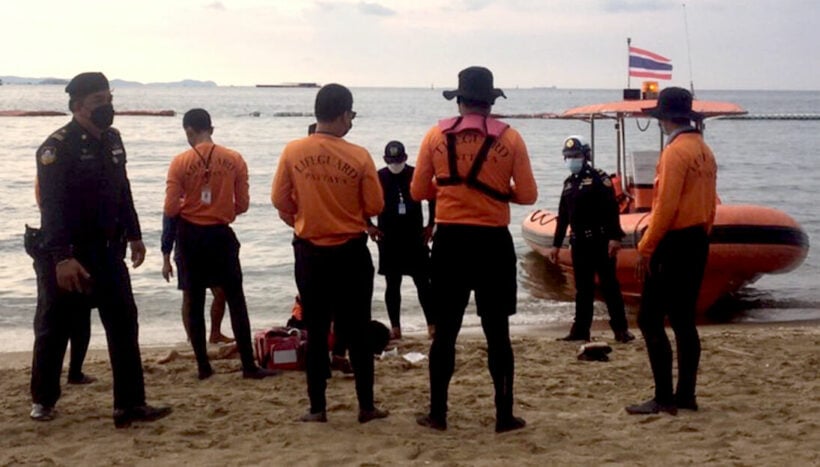 A 22-year old Thai woman was rescued by lifeguards yesterday early evening after nearly drowning in the waters of Pattaya Beach. The incident took place just before 5 pm yesterday with emergency responders receiving word of the near-drowning at 5 pm.

The young woman said that she had been travelling alone and had gone to the beach. She waded into the water for a swim but suddenly found herself in trouble when her leg cramped up. Because of the cramping, she was unable to swim back to shore.

She called out for help and she waved her hands and was able to attract the attention of the lifeguards visible in their orange vests on the beach. The Lifeguard sprung into action and raced into the waters in order to pull her to safety.

The Pattaya Beach lifeguards carried her out of the water and laid her on the beach where they provided immediate first aid. When emergency responders arrived she was still laying on the beach and said to be conscious and aware but clearly in shock from her brush with death.

The young Thai woman was taken from Pattaya Beach to a local hospital for an examination though it appeared that she suffered no serious or long-term injuries from the near-drowning.

TorontoJeff
I went surfing in Bangladesh a few years ago at Cox's Bazar.  What an insane experience.  5 or 6 guys to a huge inner tube, jet skis,  surfers and swimmers occupying the same space,  women going in fully clothed.  Fairly…