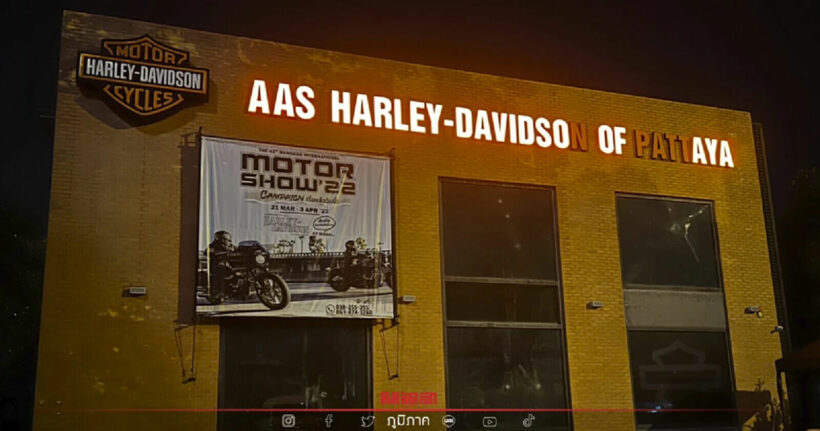 In the early hours of the morning yesterday, four suspects allegedly fired over 10 gunshots into a Pattaya Harley-Davidson motorcycle shop. Nongprue police suspect the shooting was over a business or personal conflict, though not about theft. The police are continuing to interview the shop’s staff and management to further investigate what caused the shooting.

A security guard who was present at the alleged shooting told Nogprue police one of the suspects had yelled at him before shooting. The guard, Arnon Pinpetch, told the police….

“He shouted out loud in Thai, ordering me to get down on the floor, and took my mobile phone before they fired more than 10 gunshots at the motorbike shop”.

Arnon said the suspects fled on motorbikes after they fired at the shop. Colonel Damrong Iampairote told The Pattaya News the police are checking CCTV footage nearby to track down the suspects, in addition to interviewing the shop’s staff. The police found eleven bullet holes on the shop’s glass. They found nine cartridges and a bullet on the ground in front of the shop. No injuries were reported.

This news comes after another alleged violent attack in Pattaya last week against an Italian man and a Thai woman who were travelling on their motorbike. The Thai woman told police the bystanders “came out of nowhere” and was unaware what provoked their attack, or why they became involved. Nearby security guards appear to have come to their aid.