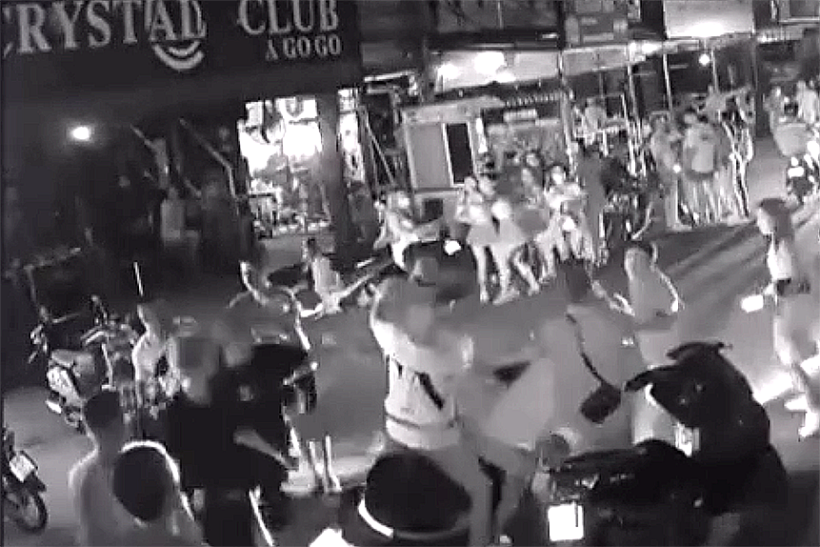 CCTV footage shows the brawl between the off-duty "security guards" and the Italian man.

A 32 year old Italian man and a 35 year old Thai female were allegedly attacked just after 2am yesterday morning along Soi LK Metro in Pattaya. The road was quite busy at the time.

The pair told police they were travelling on their motorbike, arriving in front of a closed bar called Crystal Club (currently registered as a ‘restaurant’). There were four people on the motorbike. A number of people approached the group and a scuffle broke out whilst they were still on the motorbike.

From here on it gets very confusing (as you can see on the video below).

It appears that 5 black-shirted security guards came to their rescue after the unidentified group attacked them, getting in a few punches of their own. One of the Italian men sustained injuries to his head and lip in the scuffle.

The Thai female, sitting at the front of her Italian friend’s motorbike, told police the bystanders “came out of nowhere” and was unaware what provoked their attack, or why they became involved. Nearby security guards appear to have come to their aid. The large motorbike fell over about 20 seconds into the fighting.

The couple explained to attending police that they had earlier been visiting a venue on Soi LK metro but said there were no issues or arguments at the time.

CCTV footage from the area was subsequently released by Pattaya Police showing a group of people on a relatively busy LK Metro before the arguments started and the attack began. It was after several people approached them and people dressed like security personnel joined in to try and quell the incident. Subsequently another group turned up and continued the fighting.

Speaking to The Pattaya News, one of the guards explained that the incident started when two groups of foreigners started arguing and fighting whilst standing around their motorcycles.

He claimed that the security guards were just trying to stop the fighting but foreign tourists started attacking the guards. He said the guards were only trying to defend themselves. It hasn’t been revealed which venue employed the men, or even if the venue had anything to do with the initial arguement.

Police say they have numerous accounts of the incident and have been unable to ascertain exactly who was responsible for the injuries to the Italian man and his Thai female friend.

Other accounts of the story have blamed the security guards for the attack which is not apparent in the CCTV footage.