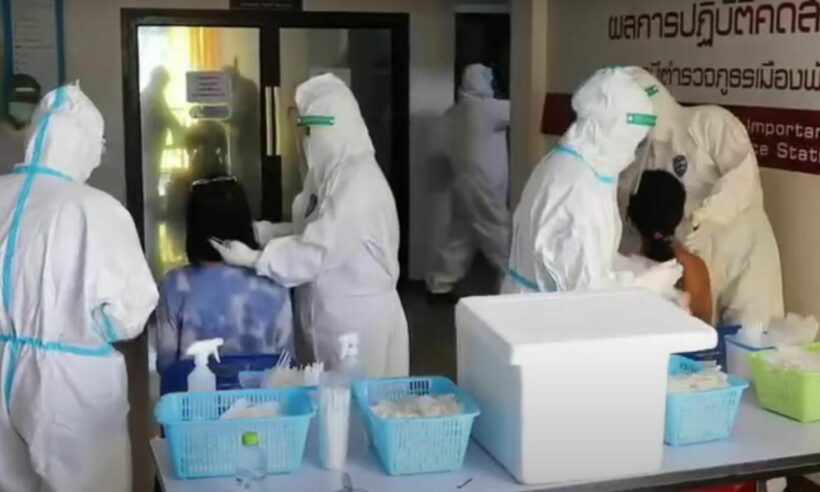 PHOTO: Those arrested in the Pattaya raid get Covid-19 tests while awaiting court Monday. (via Pattaya News Video Screenshot)

After the raid on 2 nightclubs masquerading at restaurants in Pattaya that resulted in 121 arrests, the group of arrested partygoers are all being tested for Covid-19 while awaiting court hearings. The raids of The Garden 168 and Mo Salah Bar and Restaurant late Friday night into early Saturday morning found a mix of Thais and foreigners drinking, smoking shisha, and gathering in evening entertainment venues – all illegal.

The partiers, some of whom tried to escape to neighbouring rooftops or hide, were all taken into custody and held at the Pattaya Police Station. Shisha is illegal at all times in Thailand, but social gatherings, consuming alcohol, and operating a bar or entertainment venue are all temporarily outlawed under the current Covid-19 emergency decree as well as Chon Buri’s Covid-19 restrictions.

The large group of detainees from the raid will face court appearances Monday morning to face charges for their social merrymaking antics. The attendees could be charged under the emergency decree act or violations of the communicable disease act where fines can reach 40,000 baht and up to 2 years in prison, though maximum penalties have not been often handed out during the pandemic.

At the same time, all those taken into custody are being tested for Covid-19. The tests were administered at the Pattaya Police Station by medical workers who came from Banglamung Hospital. The staff tested 107 of those people in custody from the raid, and also tested 26 other people who had come in contact with the partiers, including police officers, first responders, and reporters on the scene during the raids.

Everyone who was tested will have to either self-isolate or remain in police custody for the next 24 hours until test results for everyone come back. Anyone who tests positive for Covid-19 or considered high risk will be transferred for further treatment and observation at a local Pattaya hospital.

King Cotton
1 hour ago, George said: What ever happened to the night club owners and manergers from the big clustes in Bkk and Phuket that were going to be charged? Yes, whatever happened, indeed!   Hello, George and welcome to Thaiger Talk…

AdvocatusDiaboli
2 hours ago, George said: What ever happened to the night club owners and manergers from the big clustes in Bkk and Phuket that were going to be charged? I hear there was a rush on Brown Envelopes.

AlexPTY
"Everyone who was tested will have to either self-isolate or remain in police custody for the next 24 hours until test results for everyone come back"   i thought they would be prosecuted? No? Sorry...
Rick
How many tested positive for covid-19?

King Cotton
4 hours ago, Rick said: How many tested positive for covid-19?  Yes, that would be good to know.   Hello, Rick and welcome to Thaiger Talk Please feel free to tell us a bit about yourself in 'Introductions'. It's good to…