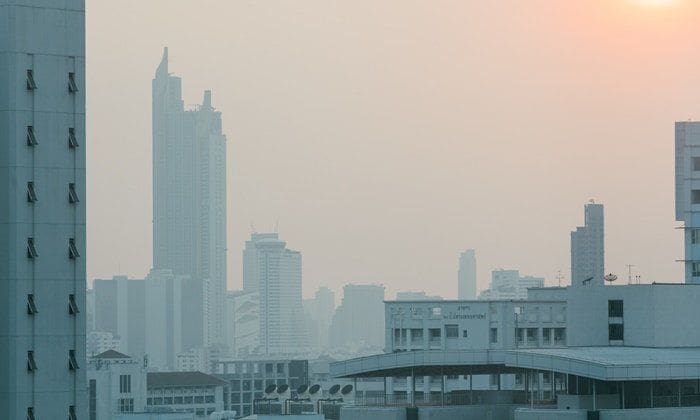 A kindergarten in Chatuchak, to the north of central Bangkok, has suspended classes because of air pollution that has landed Bangkok in the top 10 list of worst-polluted cities.

Bangkok still lags far behind some of the world’s most polluted cities, including the Afghani capital Kabul (at 576), Delhi in India (306) and Mongolia’s Ulaanbaatar (300). But the Top 10 worst air-pollution list is not the list Bangkok wants to be in.

Bangkok and Pattaya remain in the ‘unhealthy’ or ‘unsafe’ levels today whilst some cities in northern Thailand are also suffering with poor air quality.

Surang Khamneungnet, director of Jananan Kindergarten in Chatuchak, said pupils had been kept indoors in recent days and the grounds sprayed with water three times a day, but the children had become listless and were eating less.

The school is closed for National Teachers Day today anyway but will remain closed tomorrow and Friday because of the air pollution, she said.

Chulalongkorn University logistics expert Manoj Lohatepanont at a seminar on Tuesday advised schools to consider closing temporarily to reduce health risks for students and curb the number of cars on the roads, one source of PM2.5.

PM Prayut Chan-o-cha separately said the Education Ministry should use its discretion in deciding whether “at-risk” schools should be closed.