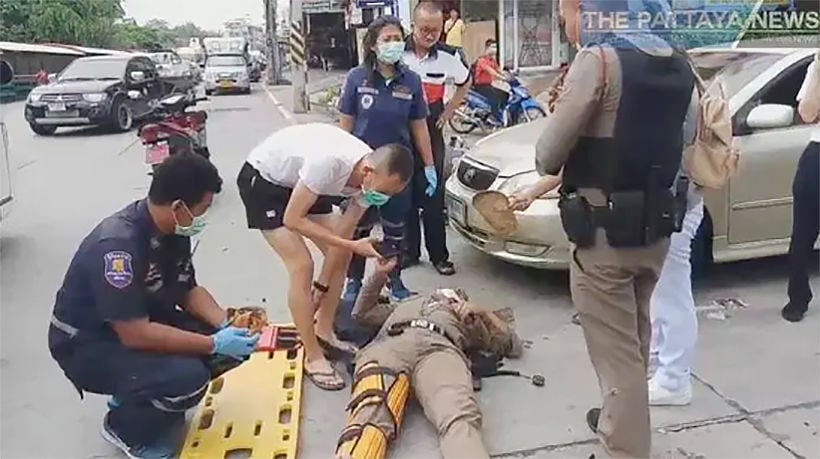 2 policemen in Chon Buri’s Si Racha district suffered “moderate injuries” in a 3 vehicle incident, when a car hit their motorbike, sending them crashing into another car yesterday. Fellow Si Racha officers were notified of the incident, which occurred at the Saint Louis Intersection in the Surasak subdistrict.

Police and emergency responders arrived at the scene to find 2 injured officers on the ground. They were taken to a local hospital for treatment. Nearby, rescue workers found a damaged police motorbike and a damaged Toyota sedan. The sedan’s driver, 25-year-old Supannikar Kansuk, was unharmed and waiting for law enforcement to arrive.

Another damaged car, a Honda, was also found at the scene. Its driver, a 36-year-old male was also uninjured.

Kansuk, The Toyota driver claimed the Honda was coming from the opposite lane and crashed into the police motorbike, which then hit her Toyota sedan. Both injured officers remain in hospital. Si Racha police are reviewing security footage from the area to determine potential legal charges.