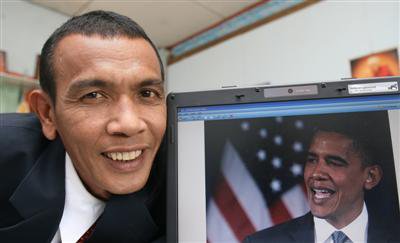 SARABURI: While your average Southeast Asian would struggle to make his way in the world as a Gerorge W Bush lookalike, America’s dashing new president is providing some exciting new career prospects for some men across the region.

One Indonesian has already found fame in the Philippines owing to his uncanny resemblance to President Barack Obama. He was well compensated after being flown over to the Philippines to do a commercial for a stomach-ache remedy with a rather less-convincing lookalike of Filipino President Gloria Macapagal-Arroyo.

Now Thailand has its very own Obama in the form of 50-year-old Saraburi resident Suphoj Bunseupwong.

Like President Obama, Mr Suphoj will be spreading a message of hope – not through rousing speeches, but through cheerful luk-thung country music songs.

Mr Suphoj, or “Obama Thailand” as he is now known in his village, was until recently preoccupied with running the sports store he owns in Ban Mor District.

A sports fanatic, he shot to local fame after taking part in a football tournament where the announcer pointed out how much he looked like the new US president.

News travels quickly in a Thai village, and before long curious locals were calling in at his shop to see for themselves.

“At first I was a bit shy with everyone calling me the ‘Thai Obama’ all the time. Then I got used to it and changed from wearing my usual open-necked shirt to wearing a navy blue blazer with a neck-tie. At every event I went to, people turned to look at the Thai Obama,” Mr Suphoj said.

Born in Ban Mor, Mr Suphoj is the second of seven children.

“Most of my brothers and sisters look like Indians or Muslims, but we are really 100% Thai Buddhists,” he explained.

Apart from running his “Num Noi Sport” shop, Mr Suphoj also moonlights as a DJ on a local community radio station and sings and plays guitar in a band.

Through his radio work he met up with some composers and record producers who suggested he use his singing skills and striking resemblance to the leader of the free world to make a breakthrough luk-thung album.

Mr Suphoj is now working on 10 songs for his highly anticipated debut album. He says these will be cheerful luk-thung numbers that you can dance to and sing along with to forget your worries – not a bad formula in these trying economic times.

Thailand’s Obama counts among his influences not left-wing radicals or fire-and-brimstone preachers, but popular Thai music artists such as Chatri Srichol, Sayan Sanya and Yodrak Salakjai.

The CD, which should be hitting the shelves in the near future, will be released under the artist name “Barack Obama”.

It was not reported whether a complimentary copy will be sent to the White House.

Abbot on the run