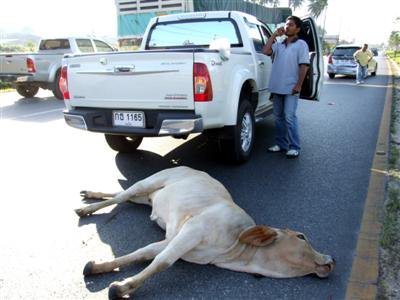 SRISOONTHORN, PHUKET: Road accidents can be costly for insurers, so when a dead ox was the cause of a two-car collision on Wednesday local police came up with a pragmatic way to ease one insurance company’s financial burden.

Thalang Police Duty Officer Prakorb Boonkwan, notified of the unusual accident on Wednesday morning, was the first to arrive at the scene.

Maj Prakorb found the ill-fated animal lying dead in the passing lane of Thepkrasattri Rd southbound, about 5 kilometers north of the Heroines Monument.

The ox had already succumbed to injuries after wandering onto Phuket’s most dangerous road and being hit by a fast-moving vehicle – one which never bothered to stop.

Soon thereafter, minivan driver Anand Chichana approached at high speed. Spotting the carcass at the last second, he swerved to avoid it. The sudden maneuver caused him to be hit full-square in the behind by an Isuzu D-Max pickup truck driven by Prasit Ngernsongsi.

Fortunately, neither man was injured in the smash.

Neither, too, did anyone come forward to claim ownership of the ox.

This is hardly surprising since its owner would have been held liable for damages caused to both vehicles, according to Maj Prakorb.

With beef currently selling at around 60 baht per kilogram and the average ox weighing 200kg, the insurer could have clawed back a sizable portion of Mr Prasit’s repair bill.

It seems that one man’s roadkill is another man’s filet mignon.

Body found at sea presumed to be missing cook