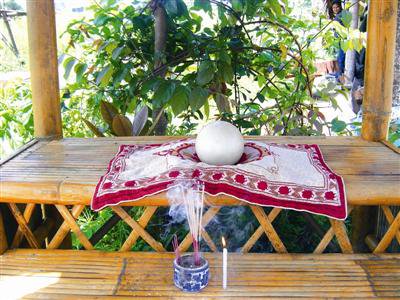 PHANG NGA: A wave of excitement has swept through a village in Phang Nga province over the discovery there of a giant egg of unknown origin.

Maitree Yaifai, of Village 2, Tambon Kheuk Khak in Takua Pa District, said he found the egg in a dry patch of grass not far from his house when he was out fishing.

The giant egg weighs about a kilogram and has a circumference of 16 inches.

On noticing the egg, Mr Maitree tapped it with his knife, but didn’t dare pick it up in case it was a giant snake egg. He was worried the mother snake would see him and come to protect its offspring, he said.

When he got back to his house, Mr Maitree consulted his neighbors. They, being somewhat less fearful than him, wanted to go and get the egg so they could find out what kind of animal it came from.

Earlier this month Mr Maitree had the egg on display outside his house for all to see. Villagers were flocking to the egg to light incense and pay their respects to it. Many were hoping it would bring them good fortune.

Wisut Khwanon, 58, a neighbour who had come to see the egg, said he thought it must have come from an animal with a very big body. He said the egg was found near an old, deep lake where a large beast could be living. Alternatively, a sea creature could have pulled itself out of the depths to lay the egg, Mr Wisut speculated.

Local fishermen occasionally caught massive crocodile-type creatures in their nets, which could have laid the egg, Mr Wisut said. None of the fishermen have ever been able to land the creatures as they always destroyed the nets before being brought to shore, he added.

Wiwan Yingwansiri, from the Phang Nga Livestock Office, said the egg looked very similar to an ostrich egg, but more detailed tests would have to be carried out before she could be sure.