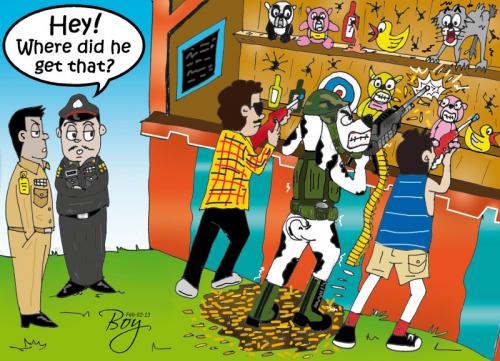 PHUKET: The recent surge in the number of violent crimes involving firearms needs to be addressed by authorities immediately, otherwise Phuket’s self-designated sobriquet “Pearl of the Andaman” risks being inadvertently changed to “Arsenal of the Andaman”.

Few regular readers of the Phuket Gazette will have failed to notice an apparent upsurge in gun crime this high season. This is perhaps not unexpected, as the island’s population swells with tourists from across the Northern Hemisphere.

Unfortunately, recent events indicate that firearms are far too easy to obtain in Phuket.

It is not surprising that locals such as the hired gunmen who assassinated Jintana Mahattanapak (story here) late last month are able to access firearms. However, the recent trend of even foreigners managing to acquire and use these restricted weapons in public is dumbfounding.

In one of the latest shocking incidents, two innocent German tourists in Patong were wounded by stray bullets fired by a tattoo-covered Australian (story here), adding a whole new dimension to the term “farang on farang crime”, as the intended target was a “mafioso” from Denmark.

That Phuket is awash in illegal firearms comes as little surprise to most residents, but the spread of illegal firearms into the expat community here seems to indicate that these weapons are increasingly easy to obtain.

Of course Phuket is not the only place in Thailand where firearms are easy to acquire. But unlike the Deep South, where assault rifles are as ubiquitous as gang som, Phuket at least has some natural barriers to stymie the flow of firearms onto the island, at least by road. Every land vehicle passing onto the island is subject to inspection at the Tah Chat Chai Checkpoint (map here), yet there are relatively few reports of seizures of drugs, guns and other contraband therefrom, even though these are clearly in abundance across the island.

As only the most idiotic of criminals would ever attempt to board an aircraft with a firearm, this begs the question: where are all these firearms coming from? The Gazette is aware that many yacht owners are in possession of illegal firearms, but in most cases these are needed to ensure their safety when navigating international waters and are rarely fired in tourist-dense areas of the island.

Given the current trend in gun-related crime, as well as the fact that we are now in the midst of a police “safety campaign” (story here), now is the time for police to not only arrest and charge those caught with illegal firearms, but also to conduct thorough investigations into where and how these weapons were obtained. This is our only hope to reduce the number of firearms on the island or, ideally, eliminate them altogether.