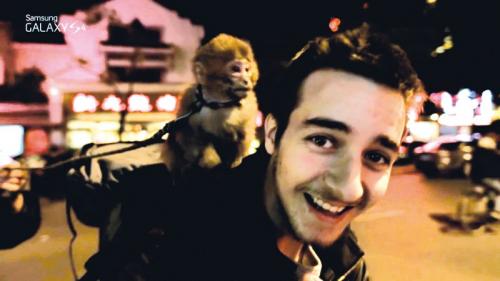 PHUKET: So there we were – me, my wife and our nearly 3-year-old daughter – sitting down for a family dinner together when the advertisement for Samsung’s latest technological marvel came on the television. A mother sends her son off to travel the world armed with only his wits, backpack, stunning girlfriend and of course his Samsung S4, reasonably priced at only 21,900 baht – just over the current price of an ounce of gold. Bargain.

As the son and his travel accomplice conquer the “must-do experiences while you’re young”, mum gets video and photo updates complete with sound bites from her son sent from around the globe, delivered right into the palm of her hand.

The advertisement has certainly hit the mark. The Internet Advertising Bureau in the UK noted the video had more than half a million views on YouTube in March alone.

Since then more than 2 million people have viewed it there.

The attractive and emotive video also struck a chord with my daughter, who shouted “Daddy! Camel!… Look Daddy! Monkey!” at the appropriate visual cues.

And it was the monkey that caught me off guard. The son in the Samsung video was standing in front of a building that appeared to be in Asia, with a baby monkey on his shoulder.

This image may be perfectly presentable in other parts of the world, but if the reports by the Phuket Gazette are accurate, touting such animals for tourist photo opportunities is illegal in Thailand. Just ask the Phuket wildlife preservation officer who occasionally gathers a posse to arrest slow loris and gibbon touts on Soi Bangla. Or ask the Russian couple caught on Koh Kai Nok in March (story here).

Regardless of how clever the ad may be, the commercial my daughter saw was broadcast on Thai TV and is surely a legal no-no in the Land of Smiles. The offending three seconds of monkey footage should be cut to meet the law.

In fact, Samsung should delete the monkey footage from the video entirely. The last thing anyone would want is a corporate giant inspiring millions of young travellers to break the law here in Thailand and contribute to the unethical profit-making from exploitation of such animals.

Infant wildlife used in these unlawful practices are often poached from their mothers, who are killed in the process. This is not speculation; it is a well-documented fact.

Otherwise, if this is the route we are collectively taking, I can’t wait to download my Bangla Slow Loris app so I know where and when I can catch up with the touts – and check the latest peer reviews and prices for photos.

Phuket Opinion: Exceptions, all of us