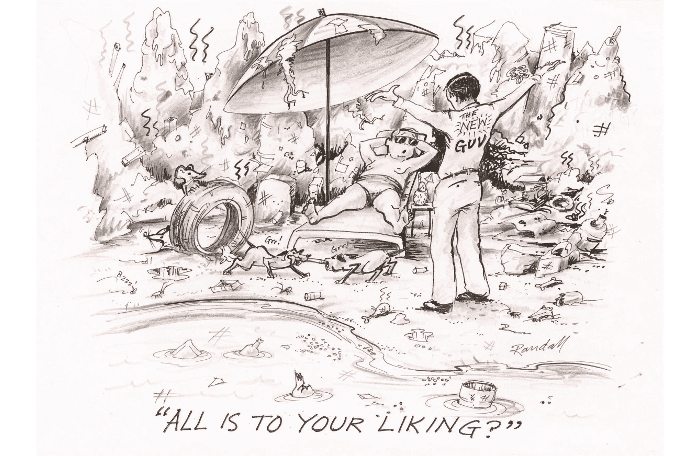 PHUKET: Cleanliness is next to Godliness, as the old saying goes, so it is hard not to agree with new governor Norraphat Plodthong’s stated goal of beautifying Phuket “by our hands”.

Gov Norraphat, set for mandatory retirement from the civil service in just a few months’ time, has understandably had to set his priorities in a practical way. When one really thinks about it, however, declaring war on dirtiness is about as ambitious a goal as any ever stated by a new governor.

It almost makes one wonder: why not just declare victory over entropy and just drop the mic before walking off the stage with those handsome C-12 retirement benefits to enjoy the golden years with?

But more seriously, and as stated in this space numerous times in the past, the trend here in Phuket is one of relentless urbanization, which has proven to be the most powerful driver of ‘dirtiness’ on the planet. Indeed, there are few places anywhere in the world that have been as dramatically transformed over the past few decades as Phuket.

Physical changes to the landscape are the most obvious. The current proliferation of new highway underpasses serves as testament to the fact that Phuket is following in the same developmental path as Bangkok.

This should come as little surprise given that all occupants of the Governor’s mansion, not to mention legions of other Bangkok-based apparatchiks, are all career civil servants appointed in Bangkok.

Rather than taking any real steps to address the root causes of an ever-worsening traffic situation, such as the dire lack of public transport, we see the traffic nightmare gradually taking on the same three-dimensional aspect it now has in the capital.

Any successful ‘war on dirtiness’ will inevitably require a change in the common culture, but there are few indications that such a change is forthcoming in the Bangkok-led, top-down culture that is Thai society.

As can be seen in some Western countries, urbanization can be carried out in ways that minimize negative impacts – not on the natural environment itself, but on the city dwellers who inevitably displace it.

At the end of the day, and as recognized by our new governor, any real change has to come from the ground up – if we can find any ground that hasn’t been covered with concrete yet.

Ministry of Farang Affairs: Girls you bring back home