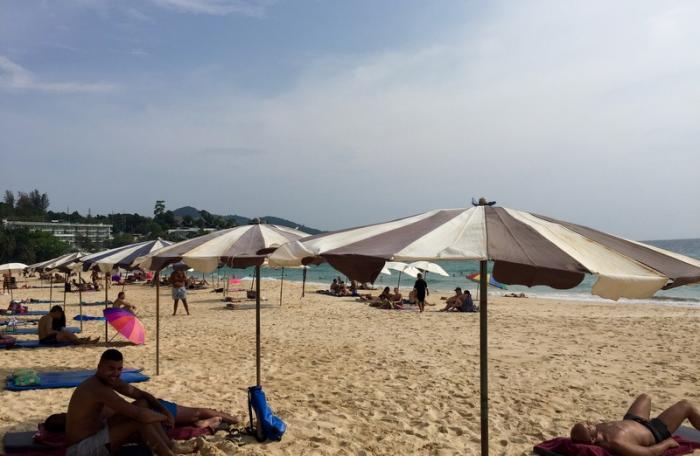 PHUKET: A year after the demolition of the last remaining buildings along Surin Beach, and nine months after plans were announced to convert the beach into ‘Rajabhakti Park’, officials are still waiting for approval for the more than 800-million-baht project to be built in its place.

The plans, which have been revised several times, were submitted by the Cherng Talay Administration Organization (OrBorTor) to the Ministry of Tourism and Sports (MoTS) Phuket Office earlier this month.

“At this stage, we have yet to receive a response from MoTS. I cannot say when the plans will be approved, but everything has been submitted from our end,” said Cherng Talay OrBorTor President Ma-ann Samran.

“However, while waiting for the ministry’s decision, we are working to arrange 18 million baht for two projects, which we expect will be completed before the next high season comes around.”

The projects include a gate surrounding the beach as well as improvements to the general landscape in the area.

“I can’t deny that there are still problems at Surin. For instance, vendors are still setting up umbrellas and chairs despite the fact that it is illegal. However, we are doing our best to gradually solve these issues,” said Mr Ma-ann.

The budget for the slated gate is about 8mn baht.

“Building a gate is an effective way to make Surin well-organized and provide security for tourists and locals. With marked entrances, officers can control who enters the beach, and will be able to prevent vendors from illegally setting up umbrellas and beach chairs there,” said Mr Ma-ann.

“So far, vendors have been able to elude authorities and set up umbrellas and mattresses on the sand. We have never ignored this issue; the vendors have been arrested and punished accordingly. However, it is not something we want tourists to witness. I think the gate will provide a permanent solution to prevent vendors from conducting illegal businesses on the beach,” he added.

While waiting for budget finalization and approval, the OrBorTor has asked the military to step in and patrol the beach, starting Monday.

“At the moment, we still have no gate, so we have to rely on human resources. The OrBorTor does not have enough officers, so we had to bring in outside help. Let’s see who dares to bring umbrellas to the beach now,” said Mr Ma-ann.

The second project, which is beautifying and improving the landscape, is a back-up plan, in case the Rajabhakti Park plan takes longer than anticipated to approve.

“We intend to use about 10mn baht of our own budget to clear and establish park land and flower gardens on about 100 rai,” said Mr Ma-ann.

“The money will also be used to beautify the entire stretch of beach. We intend to turn it into a walking street and allow local vendors to sell their wares there from Thursday to Sunday night every week. This will not only help locals, but also provide a new attraction at Surin. However, the most important rule to remember is that the walkway has to be cleared every morning,” he added.

In further news about the ever-blighted Surin, Mr Ma-ann says that due to improved water treatment systems, there is no longer any black wastewater at Surin Beach.

“We will use the treated water to grow grass and plants in the area,” he adds.

He also confirms that since the demolition of restaurants and bars along the beach, not a single restaurant owner has returned to the area or disobeyed the law.

“No restaurants have been allowed to operate here, but we do allow ‘small’ vendors to sell food and drinks from salaengs (motorbike sidecars) near the beach. It does not look ‘too bad’ and helps the locals make a living. However, once the walking street is finished, we will ask all these vendors to move there,” said Mr Ma-ann.

“Unless we take immediate action, Surin Beach will be seized back by the vendor mafia. We are fighting to reclaim it for the public instead,” he insists.