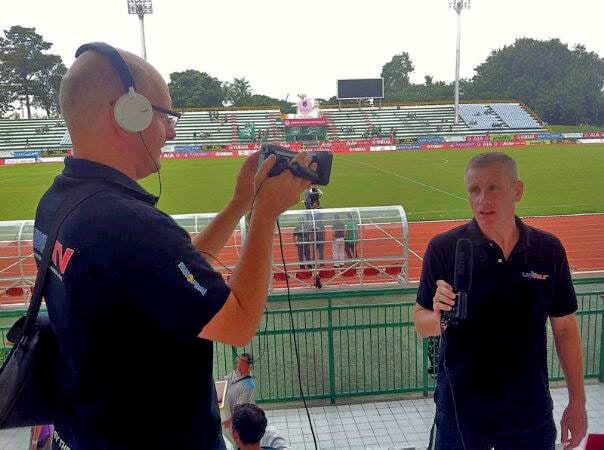 In 2013 and 2014 I was attending most of the Phuket FC matches held at Surukul Stadium as part of my work, reporting stuff for my employer at the time. I had no particular interest in soccer but it was local, it was something our company sponsored and I was happy to get paid to watch people running around a patch of grass for a few hours each Sunday evening. My opinions are not coloured by passion for the game, inside knowledge of the inner-workings of the Phuket FC or any desire to do more than wish them all well now that the party’s over.

The noise, fawning and pomp rolled out each week for the players and club owners/officials was over and beyond what the public attendance demanded. Of course there was enthusiasm, hope and some (occasional) good PR behind the scenes. Perhaps all the effort and sweat would result in wins and upgrading to the ‘big boys’ game in the national league.

There were a few regular cliques – the ‘locals’ on the opposite side to the grandstand were there for the long haul. They seemed determined to turn up each week through rain, hail and shine.

On the grandstand side most of the farangs and families sat – the ones who were living out their enthusiasm for Premier League tribalism – perhaps a hundred or so each game. There was also a group that bussed up from Rawai each game but they were MUCH more interested in the ‘social’ aspects of the game; did a lot of drinking and not a lot of barracking. Then there was the drum crew; loud, enthusiastic and committed to play their instruments, usually at the wrong times. Sadly, not many of them have a future in rhythmic musical instruments. But they were LOUD.

And, atop the stands, was the ‘restricted area’ where the owners, VIPs and ‘special people’ liked to be wined and dined, occasionally casting a quick glimpse at the assembled throng beneath them.

It was all quite surreal and, frankly, not as well attended as everyone would have hoped.

If the aim was to come up with a winning football team to take on the country’s best, the eight year project failed. If the idea was to hustle up a following for the local team, the project failed as well. If the main objective was to have a jolly good time in the top rows of the stands and tell friends that you owned the local football club, then the masterplan probably worked well.

But, was it worth 83 million baht? That’s the amount left owing according to the outgoing Phuket FC President as they addressed a media pack yesterday at Surukul Stadium. Following some player dismissals in 2012, three players sued the Club and the situation appears not to be have been properly addressed by the former administration. The current administration was quick to blame others for the problems that now engulfed the football club. I’ve heard quite a few accounts of the ‘real story’ in the past 24 hours – everyone is jumping on the band-wagon now the Club’s finished.

Sport, even local sort, even provincial sport, is as much a business these days as it is a game. Trying to win Thailand’s national football league is big business and requires more than commitment and good ball skills. It requires deep pockets and business acumen. Holding a few sausage sizzles and selling club jumpers simply doesn’t cut it anymore and Phuket FC failed, from very early on, in just about every department.

Bottom line, they just couldn’t excite the locals to line up behind their team.

I remember on the following Monday morning posting our video clips of goals from the night before and getting 100… 200 clicks. At the same time another motorbike accident would attract 2,000… 3,000 clicks. The Club just didn’t have the traction to get the following it required. The company I was working for certainly tried very hard, for three years, to help drag crowds along to the games – all as a sponsorship to support the Club. Somehow the various owners battled on for eight years.

I’m sad to see the Club being wound up and the outgoing administration being forced to lay the debt and the deep-rooted problems on the table. It’s not a pretty picture.

To those people sitting in the stands opposite the grandstand, you were the real heroes. There you were every week. You are the real losers in this sad tale – you deserved better.

Finally, there was an off-camera moment when I interviewed a past senior official of the Phuket FC. I asked him what was his real motivation. He said he didn’t really enjoy the game but it was great promotion for his ‘business’. Nuff said.