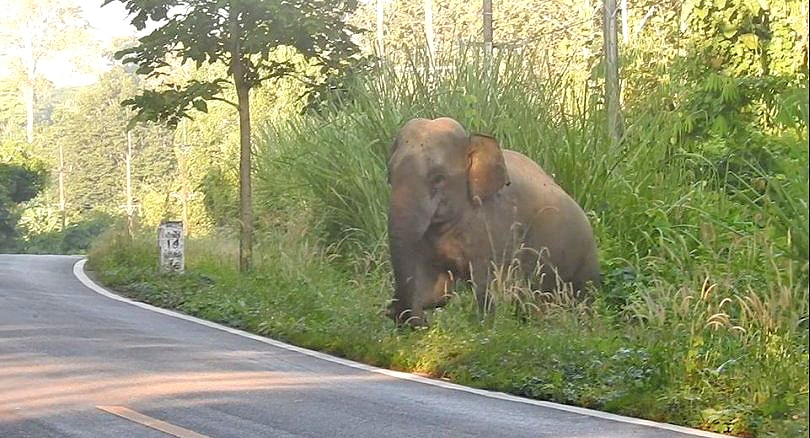 Tourists have been warned about wild elephants in a forest plantation in Kanchanaburi province, particularly a male that has been nicknamed “Nga Lek, the bully”. “Nga Lek” translates as “short tusk”.

Sadet Hui-oun, chief of Thong Pha Phum Forest Plantation, which covers about 20,000 rai (3,200 hectares) in Thong Pha Phum district, said there were about 60 to 70 elephants living in the area.

Most of them have already returned to the deep forest but some are still in the fringe area. 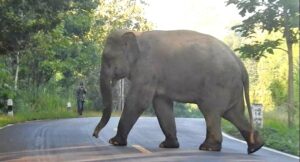 Sadet singled out an eight-year-old male elephant that officials encountered last Friday. “We call the elephant Nga Lek, the bully,” he said.

“Nga Lek, the bully, is active and suspicious. It always loves to run at people, dogs and other animals it meets along the way.”
Local people and tourists should be careful riding cars or motorcycles along Thong Pha Phum-Ban Rai Highway 3272 between Samakom Pamai Hang Prathet Thai Uthit School and a police booth in Tambon Huay Kayeng between 6pm and 9am, officials warned.

“People should start slowing down their vehicles when they see signs of wild elephants crossing the road.”

Most of the tourists were following the recommendation but a small number had not, Sadet said.

“On November 28 [Tuesday] at about 6pm, officials were monitoring Nga Lek, the bully, which was walking across a road. Suddenly a driver drove his car near the animal, ignoring officials’ order for him to stop.”

The driver was lucky that the elephant did not attack him, Sadet said. Officials stayed in the area throughout the night and saw the elephant crossing back over the road again at 7.25am.

The Thong Pha Phum Forest Plantation is a state enterprise under the Forest Industry Organisation of the Ministry of Natural Resources and Environment.

Observations on the demise of the Phuket Football Club