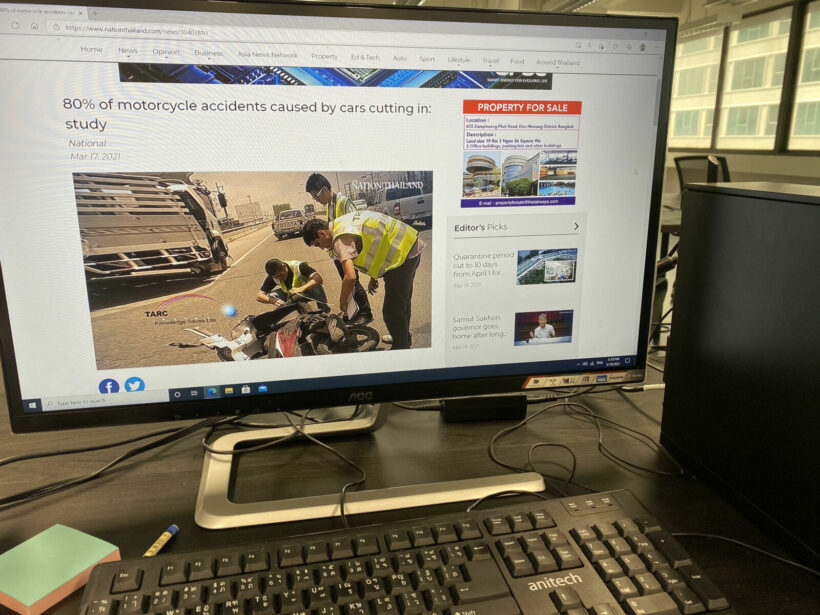 The following article was submitted by Patrick Mattimore, an experienced writer living in Pattaya. During his time in Beijing from 2009 to 2012, Patrick wrote a regular web column for China Daily and occasional op-eds for the print edition as well as the Global Times. He moved to Phuket in 2014 and wrote a regular psychology column for the now-defunct English-language newspaper the Phuket Gazette. His opinions are his own and do not necessarily reflect the views of The Thaiger staff.

A recent article in the Nation Thailand, suggests why it’s imperative we turn a critical eye to news reports in Thailand. The headline in the March 17 edition of the Nation reads: “80% of motorcycle accidents caused by cars cutting in: study.” My first thought upon seeing that headline was “Wow that seems awfully high.” It turns out that it probably is.

My second thought was to wonder where that information came from and that question was answered in the first sentence of the article. A study was conducted by Yamaha, Honda, and the Thailand Accident Research Centre (TARC).

The next logical step is to ask how that research was collected. The article answers that question by informing readers that an in-depth accident investigation studied 1,000 road accidents between 2016 and 2020.

The article never attempts to explain the apparent contradiction. The study has not yet been posted on TARC’s website, so there’s no help there. There is also no prior research to support the proposition that four-out-of-five motorcycle accidents in Thailand are caused by cutting cars.

So, what’s the harm? There are at least two problems when the media publishes a story like this one. First, there is the danger that the story will be picked up by other news sources, thereby multiplying the damage. In this case, The Thaiger has already published a part of the article and broadcast it on YouTube.

The second danger is that whenever reputable news sources publish less than exemplary stories, the sources damage their own credibility. Readers become skeptical that they can trust the individual offending media and, more generally, the press as a whole.

During my time living in China, my writing often focused on the Chinese press, particularly its reliance on poorly researched subjects, misleading polls, and statistical anomalies. My takeaway was not that the Chinese press was purposely distorting news, but that the media often just didn’t get stories right or simplified stories to a degree that made them worthless.

We have become cognizant that our opinions can be influenced by “fake news” and everywhere we turn we learn that various forces are trying to influence us by creating stories out of whole cloth.

Just as damaging to our mental health and cognitive well-being, however, are news stories that we trust to be accurate, from sources we respect, that through no malicious intent, are simply wrong. It therefore becomes incumbent on us, as consumers of the news, to dig deeper into media reports that seem a bit off the rails or, as in this case, appear to have cut some corners.