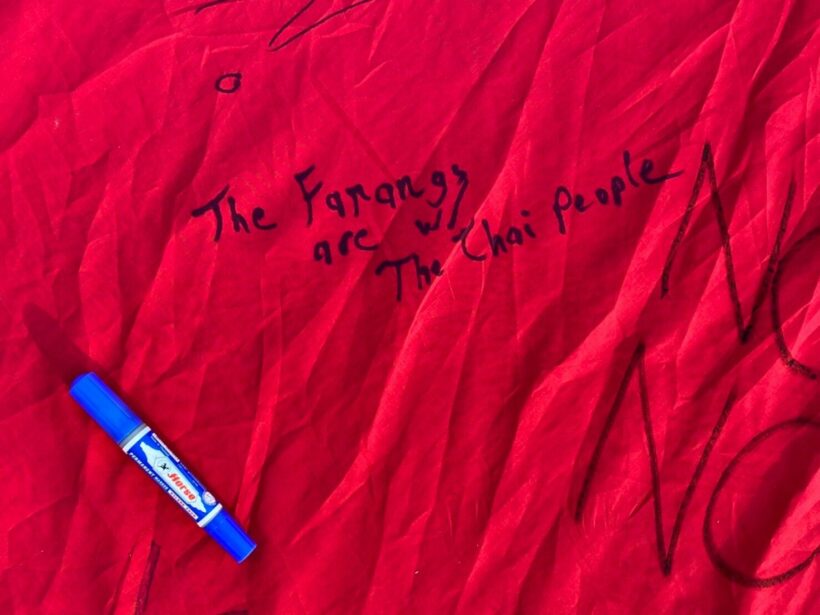 The following article was written by an American who works as an English teacher in Bangkok. He regularly attends pro-democracy rallies in Bangkok and has volunteered with medical organisations at some of the protests. He asked to remain anonymous due to fears that openly speaking out about Thai politics could affect his legal status in Thailand. His opinions are his own and do not necessarily reflect the views of the Thaiger staff.

It’s a unique time to be an expat in Thailand. For many of us, the Covid-19 pandemic turned our lives upside down. Some of us were separated from family and loved ones for months. Venues that once were filled with familiar faces were empty. Jobs were lost, wages cut, and bureaucracies had to be navigated. In those times, we foreigners often turned to our Thai friends and family for assistance and support.

While the pandemic halted travel and shutdown business, basically putting the world as we knew it on pause, the cries among young Thais for democratic reforms continued. Since July, just as tight disease control measures were easing, pro-democracy demonstrations have been nearly constant. We expats have been inexcusably absent. You will see far more western faces during a casual stroll through the mall than at a pro-democracy rally. This has to change.

We have all benefitted greatly by having Thai people in our lives. They are our friends, wives, husbands, children, and family. We cannot idly stand by while they bravely march in the streets for democracy. They have been here for us and now it is time that we do the same for them.

We are not leaders in this fight, nor should we be, but we can lend our support to the movement. Make no mistake: this movement is a Thai movement. They do not need to be saved by western people. They don’t need us to educate them in the ways of democracy. They do not need our leadership. However, we can still modestly contribute by showing up and applauding our loved ones’ courage. We can then share their bravery with the larger world.

Of course, there is a fear that involvement in these rallies could lead to our work permits and visas being revoked. However, we, as “farangs,” are often aloof to the ongoings around us. Surely, we could not be held accountable for taking part in what we thought was a group gardening project, Hunger Games cosplay, early Songkran celebration, or free outdoor concert. Wait, officer, this isn’t Khao San road? How do I get there?

In all seriousness, any fear of legal repercussion pales in comparison to the personal sacrifices of leaders like Panusaya “Rung” Sithijirawattanakul. She is a hero not only for Thai people but to all people fighting against oppression. People outside of Thailand need to know Rung’s name. They also need to know the names of those that imprisoned her. We can help make that happen.

The coverage of the pro-democracy movement outside of Thailand has been disappointing. Yes, #whatshappeninginthailand was briefly trending, but continuous in-depth coverage has been lacking. While the western media still covers the protests, it has never really dominated the news cycle. Most of the western world still knows nothing about Thailand’s violent history of military coupes. Major historical events, such as Black May, or the 1976 massacre, are not common knowledge outside of Thailand. Worst still, western news outlet’s coverage of lese majeste law, which prohibits insulting the monarchy, is sometimes reduced to patronizing articles of Asian exoticism, basically “look at those eccentric Asians with their quirky laws!”

It is a sad and regrettable fact that western media outlets will care more about Thais’ fight for democracy if there are western faces in the crowd. More expatriates mean more international media coverage. Increased international media coverage creates a press nightmare for the current government and will increase calls from the international community for democratic reforms. Economic and political pressure from outside of Thailand could help force the Thai government to finally accept the reforms demanded by the protesters.

We, as foreigners, should strive to educate ourselves on the history and culture of Thailand. Not only does our presence at protests add to our own awareness, but it can also help increase awareness of what is happening in Thailand, in our home countries. We can help shine a light on the courageous and brave actions of our Thai friends. We can further amplify their voice to an audience outside of Thailand.

On a darker note, being present at protests helps protect our loved ones from an unimaginable, but historically relevant, concern. If there are westerners in the crowd, it is less likely that government forces will turn to deadly force. It is unlikely that live ammunition would ever be used on a demonstration that boasts a heavy foreign-national presence. Doing so would result in an international incident and swift condemnation. We can ensure that our loved ones are protected simply by standing beside them. It is a very simple, yet beautiful, way we can contribute.

Most rallies are a diverse affair. Grandmas march side by side with young students. LBTQ+ groups, Environmentalist, and feminist groups hand out flyers as robed monks gingerly stroll through the crowd. On stage, folk artists are followed by hip-hop groups. All of Thailand is represented at these events. It is a welcoming and inclusive space, and yet, we are largely missing in action. So, let’s support the people who love us. They march for a better Thailand, not just for Thais, but for us. Now is the time to join them in their march, milk tea and rubber duck in hand, toward a better future.

Casting a critical eye on English-language press in Thailand -OPINION