“There were 13 children that died in this disaster. Many were later found dead, floating face down, not far from their deceased parents.”

On an otherwise ordinary afternoon, two tour boats, Phoenix and Serenata, were heading back to Phuket after a half day tour of snorkelling near Koh Racha. The weather forecast was for seasonal monsoonal SW winds and waves, about the usual for that time of the year.

But there was also a weather warning for a storm later in the afternoon of July 5, 2018. For whatever reasons the captains of the two vessels started heading back to Phuket despite the warnings or perhaps in full ignorance of them. Even a look to the SW horizon would have indicated some poor weather was on the way. 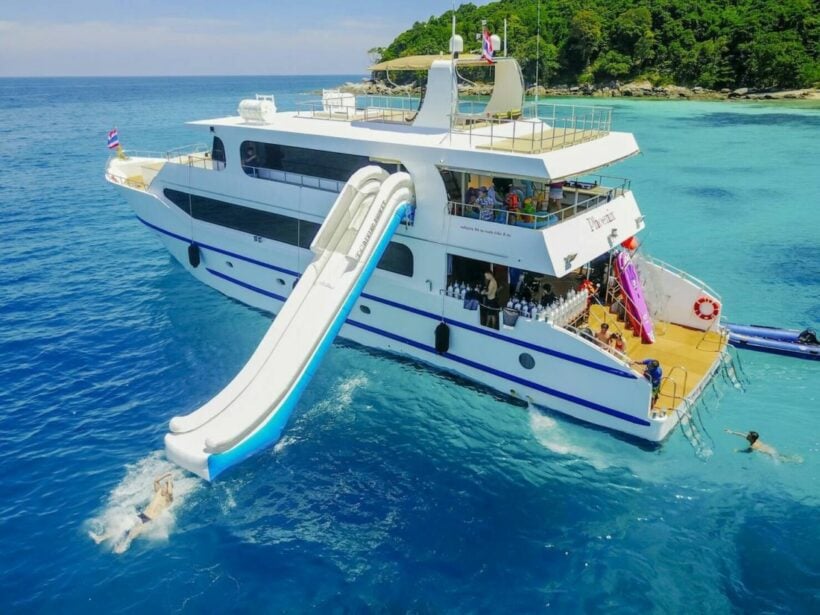 The tour boat Phoenix, as it appeared in promotional websites

Zheng Lancheng had travelled from China with his wife, daughter, son-in-law and 18 month old granddaughter for a trip to the tropical southern Thai island. Phoenix was carrying 101 passengers – 89 tourists, all but 2 were Chinese, 11 crew and a tour guide.

As the boats were off Koh Hei, south west of Phuket, a storm front, now looming large as it approached (a radar screenshot had even been posted by The Thaiger about 30 minutes before the tragedy), reached the two boats whipping up waves. The height of the waves was reported to be up to 5 metres by the Captain of Phoenix (but were more likely around 3 metres).

A boat of the size of Phoenix, in capable hands, should have handled the conditions, whilst uncomfortable for the passengers, with relative ease.

But Phoenix wasn’t just a standard purpose-built 29 metre diving boat. It had some major design and construction flaws which would contribute to the death toll on the day. Loose concrete blocks had been placed into the boats bilge to provide ballast and stability. These concrete blocks would shift as the boat started capsizing and make a bad situation worse. The boat had one watertight door, it should have had four. And the windows, smashing when the water hit them, were not marine-grade glass.

More about the boat’s shortcomings HERE.

Mr. Zheng and his family didn’t know what was going on. The boat was ‘shaking’ and passengers, although remaining silent, were ‘clearly frightened’. Suddenly the boat started lurching and tipping over. People started screaming. Most were still below decks because of the rain. Few were wearing life vests or bouyancy vests. Mr. Zheng, above decks with his family, held on to his wife but her knee had been injured. Suddenly he was in the water. Eventually many of the survivors would be found to be wearing non-compliant bouyancy vests.

He later told police there was no warning, no advice from crew beyond ‘Get out’.

Other witness reports say that the Thai crew and Captain, all saved on the day, were the first to get off the boat leaving more than half the passengers below decks and many other floundering around in the water. 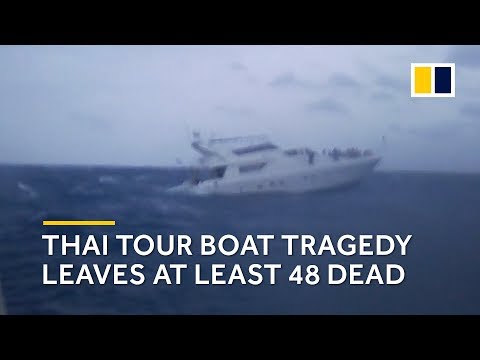 Mr. Zheng struggled onto one of the life rafts, dragged in by other bewildered passengers. By this stage the boat had sunk.

“There were no words between any of us in the rubber boat. All of us were stunned. We could only hear the sounds of the sea.”

Mr Zheng said if they had known there would be a big rubber boat floating around after their boat sank, they might have first put on life vests and jumped in the vicinity to be saved.

“However, we knew nothing about it. No one gave us any warnings or guidance.”

There were 13 children that died in this disaster. Many were later found dead, floating face down, not far from their deceased parents. In total, 47 people died as a result of the Phoenix sinking.

The other boat, Serenata, had also sunk off Koh Mai Thon but its 42 passengers were all rescued.

In the days following there were countless missteps and mishandling by Thai officials and politicians. Among them the Deputy PM Prawit Wongsuwan pushing the blame onto the boat’s ‘real’ owners saying the situation was just “Chinese killing Chinese”, alluding to the early revelation that the boat was really owned and funded by Chinese who merely had a Thai ‘shelf’ company to comply with the law.

“Some Chinese use Thai nominees to bring Chinese tourists in. They did not heed warnings, which is why this incident happened. This needs to be remedied,” Prawit said.

But what warnings? The boat had been ticked off, approved and registered by Thai Authorities. Clearly unsuitable for its designed purposes, the vessel had been able to conduct tours with paying customers – all under the watch of Thai marine officials. For all the finger pointing and shifting of blame, the cause of the deaths lay fairly and squarely at the feet of the Thai authorities, the Thai Captain and Thai crew who had it within their entire control to avoid the loss of life.

Then, the final insult, as the Thai Government tries to auction off the wreck of Phoenix saying they needed to pay for the storage fees at the Rasada shipyard where the broken relic still sits.

Read our editorial about the auction HERE.

Two years later and the fallout can be properly measured. Probably the most obvious is the drop in Chinese tourism (which was already languishing before the coronavirus pandemic stated). Chinese social media savaged the handling of the entire Phoenix ‘situation’ and was candid in recommending that Chinese tourists avoid Phuket and Thailand in the future. And that, in part, has happened.

Phuket’s Chinese tourist flow dropped dramatically, up to 30-50% year on year (based on hotel bookings, tour bookings and airport arrivals). There was also a drop in Chinese patronage for the rest of Thailand although the Thai government stepped up measures to keep the numbers rolling on, including the waiver of the visa-on-arrival fee and special ‘Chinese only’ immigration queues.

From a media point of view, Phuket largely ‘dodged a bullet’ as the world’s media was focused on the ongoing drama at Tham Luang Caves, luckily with a much happier ending (the rescue of the 13 young men from the caves in Chiang Rai). The Phoenix boat tragedy was not as widely reported as it would have been normally.

But Phuket’s reputation had been wounded. The stench of the unnecessary 47 deaths has tarnished the island’s ‘tropical playground’ sales point and will hang over the island for years, especially in the minds of Chinese visitors.

Last year the Phuket Governor said there would be no memorial for the 47 lost lives “because no one wants one”. He also told The Phuket News last year that the Chinese government and Chinese tourists now had more confidence in the safety of tourism in Phuket because the number of Chinese tourists travelling to Phuket has increased steadily after the incident (but never reached anywhere near the same popularity).

His misinformed comment, unchallenged by Thai reporters, bore no resemblance to the facts or explained hotel occupancies in Phuket sitting at record lows and the absence of the earlier throngs of Chinese travellers pre-Phoenix disaster.

Tow years later, the weather in Phuket is fine, with moderate winds, cloudy skies and a temperature of 31 – a perfect day for a tour off Phuket’s coast to one of the many, many islands (except there are very few boats running at the moment).

Now Phuket faces an existential threat to its tourist business – a tiny virus that has shut down the island’s tourism almost completely – that will be even more complex to survive than the Phoenix boat disaster. But the island has survived numerous hits in the past and, somehow, is able to rebuild following the disruptions.

Two years after that fateful day off the south east coast of the island Phuket is a very quiet place indeed. 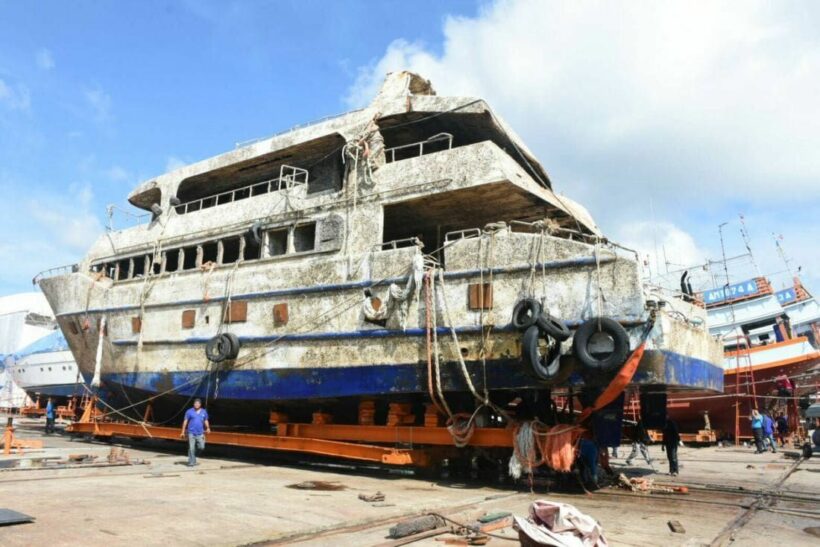