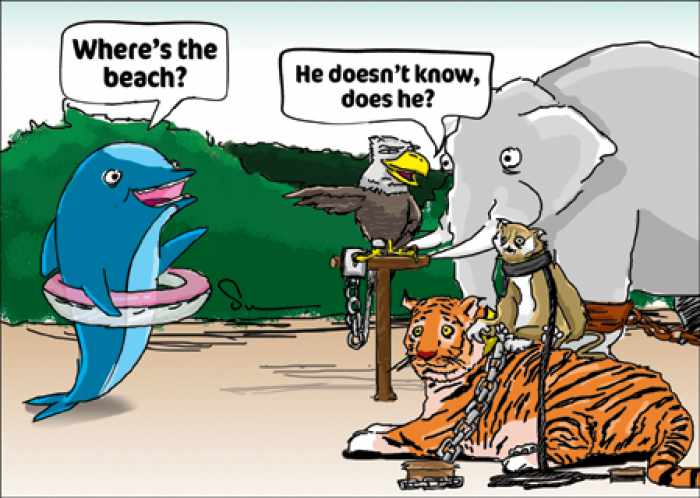 PHUKET: The fact that a dolphinarium is set to become one of Phuket’s newest tourist attractions (story here) comes as terrible news for the island’s reputation abroad, running counter to all of the positive changes we have witnessed in recent months.

Our position on the ethics of keeping sentient creatures like dolphins and other marine mammals in captivity for amusement and financial gain remains unchanged since the last time we addressed the issue in this space (story here).

In 2011, Canadian investor Daniel McDaniel wanted to invest in a similar project in Rawai, but public outcry forced him to reconsider and eventually scrap the project (story here).

Unfortunately, construction of the new dolphinarium is already a fait accompli, and the facility, at least in its current state, appears to be woefully inadequate to serve as a home for even a single dolphin, let alone six of them.

The news of Phuket’s backslide comes not long after India became the world’s fourth country to ban keeping dolphins in captivity. The Indian Ministry of Forests and Environment released its “Policy on establishment of dolphinaria” amid proposals to build marine mammal parks. The Ministry’s called dolphins “highly intelligent and sensitive” creatures and argued that they should be seen as non-human persons with rights.

Even the United States’ National Aquarium in Baltimore announced earlier this year that it is considering retiring its eight bottlenose dolphins and moving them to an oceanside sanctuary.

Dolphins and other marine mammals kept in captivity suffer from chronic stress and behavioral abnormalities, such as odd repetitive movements, self-mutilation and aggression, Lori Marino, an Emory University neuroscientist and expert on dolphin cognition, explained to National Geographic earlier this year.

But the most disturbing part of the news of Phuket’s proposed dolphiarium is that three of the dolphins were allegedly captured in Japan. In 2009, the documentary The Cove blew the lid off the annual capture and slaughter of wild dolphins by the Japanese in Taiji Cove. Subsequent documentaries like
Blackfish have further exposed the impact captivity has on cetaceans.

Decades ago, performing dolphin shows were typically the only way people could witness these fantastically intelligent creatures, yet the shocking methods of how they are captured and killed remained a well-guarded secret. It is now time that images of dolphins jumping through hoops and doing other tricks for human enjoyment be consigned to the annals of history.

We hope that the Fisheries Department, the National Council for Peace and Order and other relevant agencies will find a way to put a stop to the import of the dolphins reportedly on their way to Phuket as we write this.

We also ask the investors in Phuket’s dolphinarium to reflect on what they are doing, and why. Perhaps a viewing of The Cove would help change their minds and compel them to try to find a more humane use for the facility.

Phuket Opinion: It’s up to all of us to save the foolish from Phuket’s rips