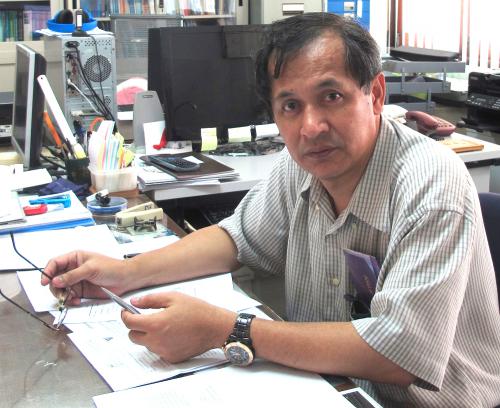 Dr Somkiat Khokiattiwong, 54, is head of the Oceanography and Marine Environment Unit at the Phuket Marine Biological Center. A Phuket native, he has a master’s degree in oceanography from McGill University in Canada and a PhD in eco-toxicology from Southern Denmark University, Denmark. Here, he talks about how Patong can better handle its treated wastewater.

PHUKET: It is one thing to test seawater; it’s another to dispose of treated wastewater properly. On the first point, I think every local government in Phuket should be monitoring their own seawater. Right now, my department does it because we have trained staff and enough budget, but technically it’s not our responsibility– our job is marine research – and I can’t predict how long we’ll be able to continue.

It would probably cost each local government a couple of million baht a year to do its own tests. Phuket makes billions of baht for the nation every year through tourism. I don’t think it would be a hardship to provide the necessary budget.

We usually think of testing seawater when we hear that untreated wastewater has been released into the sea, but it’s important to realize that even treated wastewater can be harmful to the environment. It might look clean, but if we don’t handle it properly, it can create problems. I’ll use Patong as an example to explain this.

Ideally, treated wastewater would never be released into the sea. It’s full of nutrients and is an excellent fertilizer. It is best used for watering plants at parks and other public areas, and doing so saves money on fertilizer.

It’s precisely because it’s such a good fertilizer that this water creates problems in the sea – it stimulates the growth of algae and seaweed, which can end up depleting oxygen levels in the water, which can lead to all kinds of problems, including the death of marine animals.

If Patong must discharge treated wastewater into the sea, there are ways to do it that can mitigate damage.

First, where the water is released is important. The farther out to sea, the better, because the nutrients are diluted more in the deep water and pose less of a danger, and currents can help take them away from shore. Patong should install very long pipes that will deliver the water far out to sea.

Second, when the water is released at sea is important. The best time is at low tide – up to two hours before the lowest tide – because the force of the tide will carry it out to sea. Patong should have a system set up to release water in accordance with the best timing vis-a-vis the tide.

The other thing to keep in mind is that taking care of water is an ongoing process, not a one-shot deal. It’s a very good thing that the Patong Municipality has its own wastewater-treatment plant. However, this won’t solve their problems forever. Keeping in mind their growing population of tourists and residents, they need to regularly assess whether the plant is keeping up with their needs.

The other thing that should be ongoing and regular is testing. It doesn’t matter so much how often the water is tested – every day, once a month, or every two months. The important thing is that it’s tested regularly, on a schedule.

As I said, my recommendation is for each municipality to be given a budget to do their own water testing. We are always available to support them and give them advice.

Our economy depends a lot on the beauty of our environment. We need to do whatever is necessary to keep it healthy.