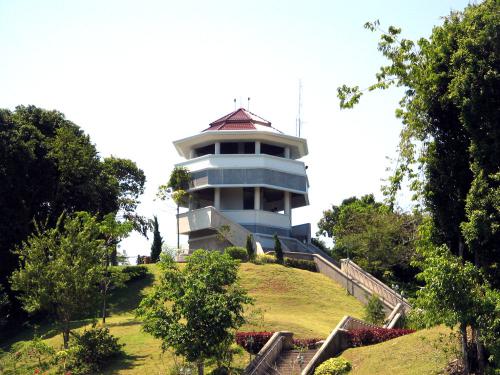 PHUKET: Standing at the top of the tower at Khao Khad View Point, one is surrounded by a breathtaking vista. What a marvelous project it is, with footpaths meandering through the pleasant woods below – and, yet, on closer inspection, this iconic Phuket landmark is crumbling to pieces. The painted cement “boards” of the walkways below have caved in and cracked, becoming hazards for guests as the site continues its visible march to ruin.

We as a species are builders. The structures we leave behind define our civilizations, our cultures. Yet though we build marvels such as the Great Wall of China, the Pyramids of Giza, the Eiffel Tower and the Ferris Wheel – we are not caretakers.

And who can blame us? Who remembers “great maintainers”? It is easy to find out who founded the university you attended, but who were the janitors and the masons that kept the wood floors polished and the mortar between the stones?

Would it be unfair to blame governors and other local politicians for wanting to stand in the spotlight during their rule, doing what is so natural for our species? Can we blame them for spending billions of baht on new structures, underpasses, roads and parks, while letting the projects of their predecessors fall by the wayside? What politician doesn’t want to leave his or her mark? And maintenance is no way to achieve this.

In fact, it seems that maintenance is not factored into project budgets here at all. Far too often the central or provincial government coughs up absurd amounts of cash only to “complete” a project – especially while the ink is still drying after the press closes the paper – hailing the project’s glory.

But the responsibility for maintenance is handed over to the local government, which is often under-funded and more focused on the necessities – sewage treatment, garbage disposal, and electricity supply.

Worse yet are projects such as the Sea Gypsy Cultural Center; before its doors even opened, responsibility for the endeavor was shuffled and lost among several parties, with no one willing to bear the burden of maintenance.

In Phuket, I fear those great works and towers with beautiful views will slowly decay and give way to the new and vastly more expensive projects, as governor after governor attempts to leave his mark on this island we call home.