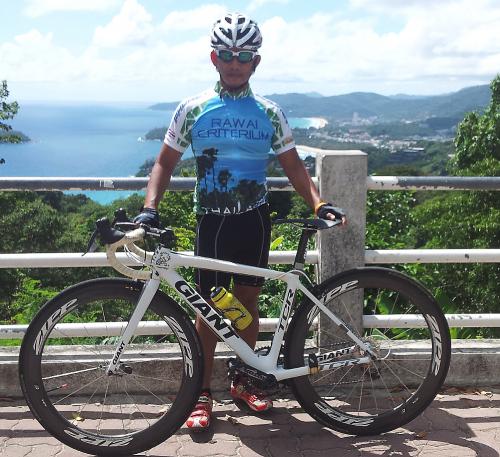 Danny Ruangkanch, 54, is a Narathiwat native. He graduated from the California College of the Arts 29 years ago, and spent 10 years working abroad before coming back to Thailand. He came to Phuket 15 years ago and works as a freelance artist and Moderator of Thaimtb.com. He joined the Phuket Bicycle Club in 2000.

Here he talks about how to make Phuket safer for cyclists.

PHUKET: When I joined the Phuket Bicycle Club in 2000, we had 75 members. Now we have 1,037 members, 57 of whom are women. More and more people are becoming interested in cycling in Phuket, I think mainly because people are more concerned about their health and are exercising more.

Still, I think there are lots more people who would like to cycle but don’t because they are scared. They think it’s too dangerous to ride a bike in Phuket.

Since I started riding here, I have not heard of a bicycle accident on the road. At the same time, I think Phuket roads could be a lot safer for cyclists.

The way I see it, making cycling a safe sport isn’t the responsibility of just one group: riders have to take care of themselves; drivers have to watch out for riders; and the government needs to do its part to create a safe environment for everyone.

Let’s start with the riders. I’ve seen plenty of riders who don’t seem to care about safety. Some don’t wear helmets and some don’t have lights on their bikes to make them visible to other traffic. I’ve also seen some bikers zig-zag in and out of the bike lane just for fun.

To increase safety, bikers should start with themselves. In the bike club, we ride in groups, which is safer than riding alone, and we also arrange activities to teach riders about safety.

The most important thing that vehicle drivers should do to keep cyclists safe is to remember to share the road – it belongs to all of us.

Vehicles that drive in bike lanes put cyclists at risk. So do drivers who drive too fast, and motorcyclists who ride in the wrong direction. Drivers need to stay aware that bikers are sharing the road with them.

Finally, the government also has an important role to play.

Originally, towns on Phuket were designed on a small scale with roads that were suitable for small vehicles like bicycles and motorcycles. Now, the towns have expanded into small cities and there are more and larger roads suitable for cars and trucks. There are also a a lot more vehicles on the road.

The government can do a lot to protect cyclists in this new scenario.

The first thing is to add bike lanes across the island. They should be at least 2.5 meters wide and they should be clearly identified as being for cyclists. The government should also maintain the bike lanes that already exist. Along some of them, the painted line separating the lane from the main road has almost disappeared. This might be one reason drivers don’t respect bike lanes – because they can’t see them.

Thalang is a good model for bike lanes. Thepkrasattri Road can be dangerous during heavy traffic, but it is a good place to ride otherwise because of the bike lanes. Two rides I recommend are from Thalang to Sarasin Bridge and from Sakdidet Road to Cape Panwa.

If we work together, we can make Phuket a safer place for cyclists, and if it becomes safer, the number of riders will definitely increase.

Phuket Opinion: The meter of madness