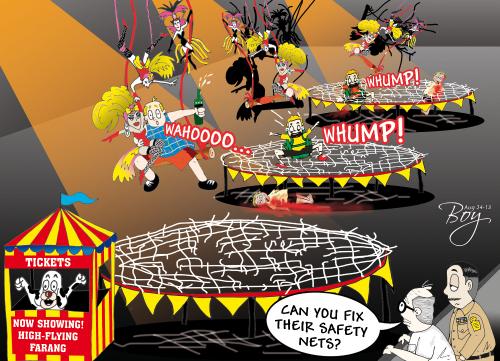 PHUKET: A recent report about the problem of “homeless foreigners” from the West becoming a burden on the Thai state (see here) set off an unprecedented flurry of comments on popular online blogs.

Like so many dimensions of modern life, the problem of “homelessness” has reached global proportions, as cases like the diaspora of the stateless Rohingya from Myanmar show.

Although misery is relative, the subsequent online debate about what should be done about “down and out” Westerners in Thailand clearly touched a nerve among many expatriate residents.

The reactions ranged across a broad spectrum, as one might imagine, given the wide diversity of backgrounds of those who engaged in the debate. At one end, some were quick to dismiss those who “fell through the cracks” as hopeless drunks, junkies, sex addicts – or any combination of these.

Such commentators saw the plight of the homeless as a direct result of their own lack of self-control, maturity or other behavioral shortcomings. Hence, they should be forced to lie in the bed they made for themselves with no assistance whatsoever: end of debate.

At the other end of the spectrum, some people showed a great deal of sympathy, recounting inspiring tales of their own successful struggles to pull themselves up after bad times, many pointing out the pivotal roles that Good Samaritans – both Thai and foreign – had played in helping them rebuild their lives.

While there was a great disparity of opinion about what the Thai government, as well as diplomatic missions in Thailand, should do to address such cases, there was little debate that Thailand continues to be a powerful magnet for a great many people who, failing to find happiness in their home countries, seek it here.

This influx should come as little surprise given the way the country promotes itself as an “Amazing” tourist destination and makes entry easy for western visitors through lax immigration laws – visas on arrival, no mandatory travel insurance, and so on.

We live in an extraordinary age of technological advance, yet hobos, bums and the homeless remain a stubborn presence.

One fact has become increasingly self-evident: social stability depends primarily upon family and small-scale community support systems of the type that have never been adequately recreated by any economic system, from communist to capitalist and everything in between.

Any foreigner considering a move to Thailand is warned: it is possible to find happiness and prosperity here, but the safety net that will support you during times of trouble will be the one you have set up by yourself.

Phuket Opinion: Waste not, and waste not wanted