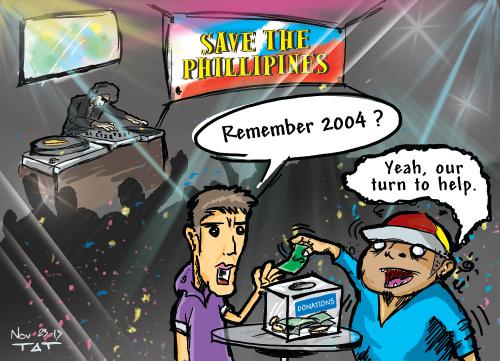 PHUKET: We offer our sincerest condolences to the families of the many victims of Super Typhoon Haiyan that hit the Philippines last week, and commend the multiple relief efforts still underway here in Phuket to help residents on the islands of Samar and Leyte, the most badly affected areas.

Among those who deserve praise are some familiar names, such as Phuket’s Rotary Clubs, along with the island’s Filipino community and the people behind the special benefit show by Black Eyed Peas rapper “apl.de.ap” (story here).

Although it is far too early to ascertain an accurate death toll, initial estimates by some local officials in the city of Tacloban, the capital of Leyte province, appear to have been drastically, albeit fortuitously, overinflated.

Nevertheless, it now appears that the death toll is likely to surpass 4,000. Many of those people could have survived had they realized the true dangers of the approaching storm. Haiyan produced a catastrophic sea water surge of the kind we have seen in tropical storms so many times before – most notably by Cyclone Nargis, which left 138,000 dead in Myanmar’s Irawaddy delta in 2008.

The death toll from such storm surges can be drastically reduced. The number of fatalities from Hurricane Katrina, which wreaked havoc on New Orleans in 2005, was effectively minimized because authorities in the US did a better job of warning people and conducting evacuations.

This latest tropical storm tragedy raises, yet again, numerous issues ranging from the effectiveness of Filipino authorities to issue warnings about the impending dangers, to the government’s preparedness to deal with the aftermath.

Of interest from a much broader perspective is the “nature of disaster”, especially in this digital age of instant information. With so many people rapidly sharing Facebook posts, furiously punching out Twitter tweets and competing for attention with numerous other social media applications, it seems that we humans, as a species, are quickly developing a new form of collective global consciousness – even as an estimated one billion people still do not own a mobile phone, and even fewer, about a third of the global population, have no internet access whatsoever.

Not surprisingly, all too often those who fall victim to disasters like Nargis and Haiyan – not to mention the 2004 tsunami disaster – fall into that latter category.

One of the greatest challenges confronting humanity at this critical stage is to stabilize the global population and ensure that the least fortunate among us have access to potentially life-saving information, and are no longer forced to live in squalid conditions in high-risk areas.

Phuket Opinion: Who deserves a consul?