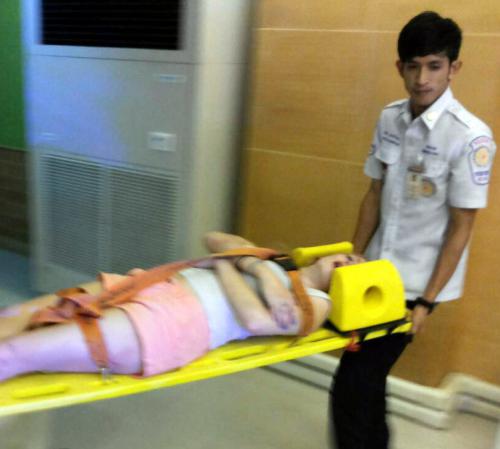 PHUKET: Police are waiting for the results of a toxicology report for British tourist Romany Mitchell after she told them her drink in Phuket was spiked.

The tests were ordered after the 21-year-old student from Edinburgh reported to police that she was fleeing an assailant in her hotel room before she plunged from the second-floor balcony of the building on Nanai Road, Patong, early on November 11.

“She is now in good condition. The doctor will check on her again before releasing her,” Capt Nattaya Suwanpong of the Patong Police told the Phuket Gazette yesterday.

“She left at about 8pm. Although she was still wearing splints on her right arm and her right leg, she could move by herself with a crutch,” a nurse told the Gazette.

“She told us that she only drank two glasses of alcohol. She went on to explain that a few minutes after having the drinks, she felt like she could not control herself, so she tried to find her way back to the hotel,” Capt Nattaya said.

“From that point, she didn’t, and doesn’t, remember anything until she realized that she was in her room and that someone was attempting to assault her,” he said.

In an attempt to escape, she ran to the balcony and fell, explained Capt Nattaya.

Police are waiting for results of a blood alcohol concentration test, as well as the toxicology report.

Hotel staff told police that Ms Mitchell and a female companion had left the hotel at about 10pm to have a drink at the Tiger Live Band bar complex on Soi Bangla (map here).

“The staff reported Ms Mitchell coming back alone at about 3am. They said she wasn’t walking straight, so a female employee helped her to her room and then left her there to rest alone,” Capt Nattaya said.

About 40 minutes later, they heard commotion. Outside, they found Ms Mitchell on the ground.

Police have started examining CCTV footage that could offer clues to what happened just before her plunge.

Nonetheless, police are searching for other CCTV footage in for leads.

Body found off Phuket believed to be missing Singaporean student

Police arrest man for rape of 10-year-old in Phuket