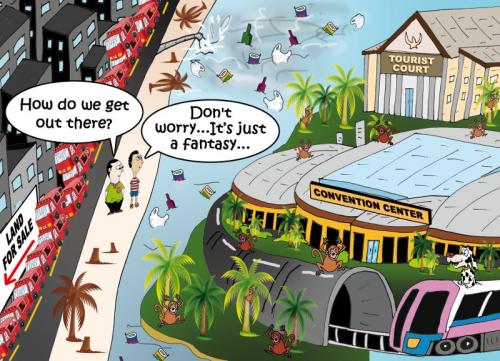 PHUKET: Recent talk of establishing a special court to fast-track legal cases involving foreign visitors raises some interesting issues, but at the end of the day is unlikely to result in little more than that: just talk.

The reasons put forward to establish such a court are probably well-intended and certainly easy enough to understand. Thailand’s tourism industry is a key generator of revenue, probably the main reason behind the baht’s sustained resurgence against most other major foreign currencies since the dark days of the “Tom Yum Kung” financial crisis that befell much of the region in 1997.

Due to Thailand’s enduring attractiveness to foreign visitors, the baht continues to inch closer to the fixed 25 baht to US$1 exchange rate that was in place for many years before that economic collapse.

Since 1997, Thailand’s attractiveness and good value for money have been more than enough to offset any number of negative factors that might deter foreigners from considering the Kingdom as their destination of choice: political instability, including rioting; arson attacks and shooting murders on the streets of Bangkok; one of Asia’s deadliest ethnic insurgencies in the Deep South provinces of Yala, Pattani and Narathiwat; unprecedented flooding and other natural and man-made disasters.

The number of crises that the Thai tourism industry has managed to overcome over the past two decades is now far too extensive to list on a tourist-oriented T-shirt of the kind that appeared on the streets of Patong after the 2004 tsunami disaster. The momentum of the Thai tourism juggernaut is reflected in the Ministry of Tourism and Sports’ bold prediction of a record-breaking tourist arrival figure of 24 million by the end of 2013.

Of course the sheer number of foreign visitors makes it inevitable that ever more tourists will end up in the last place they would ever choose when planning their perfect Thai holiday: entangled in the Kingdom’s notoriously slow criminal justice system, where some cases can linger for over a decade before resolution — a time period very different from that typically meted out in the form of “permits to stay” granted to foreign tourists by Immigration.

The main reason that a tourist court will never happen is simple: bureaucratic inertia. It is easy for the Tourism and Sports Minister to say that having one would be nice, but getting monolithic institutions like the Justice Ministry and Royal Thai Police to take action without any real economic inducements seems unlikely indeed.

For this reason we will place the Tourism Court in the same file with so many other tourism related, pie-in-the-sky projects that have never come to fruition: the Phuket International Convention Center, “Monkey Island” and of course a safe and reasonably-priced public transport system.