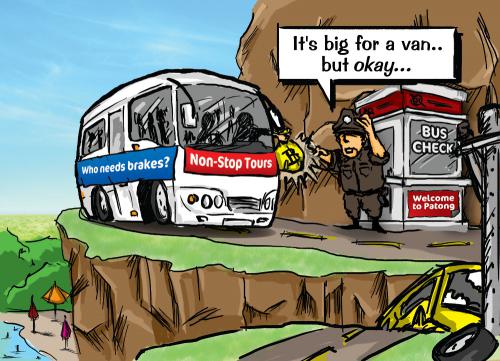 PHUKET: The Phuket Land Transport Office’s trial ban on bus and truck traffic to Patong via the infamous Phra Barami Road over Patong Hill is a good idea.

However, lack of proper enforcement by responsible officials, especially Traffic Police units, has the potential to jeopardize success during the trial period – and in the long term, if the measure is adopted on a more permanent basis.

The idea to ban trucks and buses heading westward over “Mt Mayhem” will certainly be costly and perceived as a major injustice and inconvenience by responsible business operators with proven safety records; such measures seldom sit well with victims who are forced to endure sanctions imposed on them due to the negligence, recklessness or sheer stupidity of others.

However, something must be done to stem the loss of life, injuries and property damage that occur annually on the road, one of the most accident-prone sections of tarmac anywhere in the southern region.

The ban, set to go into effect after a few weeks of public awareness campaigning, would likely improve not only safety, but also traffic flow over the hill. For every serious accident that has taken place there over the years, there have probably been at least 10 other incidents of breakdowns or stall-outs by underpowered or overladen trucks. Such instances increase the dangers on the already notoriously hazardous stretch and rapidly result in traffic tailbacks that sometimes take hours to resolve.

That said, none of the suggested “alternative” routes into Patong, especially the hilly coastal roads through Kamala and Karon, are particularly safe either. Authorities should carefully compare the number of bus and truck accidents that take place along those roads before and after the trial ban goes into effect, in order to statistically determine whether the change is truly justified – or is just making one area safer at the expense of others.

If the trial ban is successfully implemented and adequately enforced, and these are indeed big ‘IFs’, those who will suffer most will undoubtedly be business supply trucks based over the hill in Muang District, home to many of the major warehouses on the island. Most will be desperate to avoid the time and expense of travelling half way around the island to deliver goods to Patong, and this will likely introduce a fertile new avenue for official corruption. The last thing we need is to create an underground “corruption toll road” until such time as authorities actually build a tunnel under the hill.

All considered, however, we cautiously support the trial ban, but only if it can be thoroughly and justly enforced.

Phuket Opinion: You call that a hill?