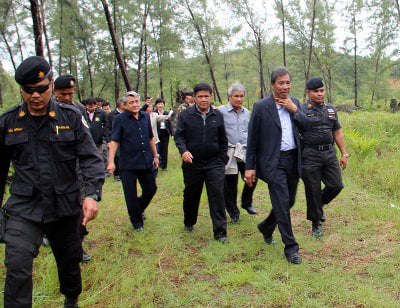 PHUKET: Narit Khamnurak, Chairman of the House of Representatives Standing Committee on Land, Natural Resources and Environment (CNRE), this week led a parliamentary inquiry to follow up the investigation into resorts accused of encroaching on national park land on Phuket’s west coast.

After reviewing the progress made, Mr Narit ordered the teams investigating the four “new” cases to be investigated, including the home of French businessman Bernard Gautier, to complete their work as soon as possible.

The original deadline for completing their investigations was September 25, Mr Narit reminded them.

However, Sirinath National Park chief Cheewapap Cheewatham pointed out his officers learned of Mr Gautier’s house only at the end of August and that the two Malaiwana projects and the Istana projects now under investigation were added to their “to be probed” list only last week.

“Hopefully, we will be finished surveying the sites by the end of next week, but we will still have to send our surveys to the DNP to concur our surveys with aerial photographs of the area.

“We all know that will take time, so I don’t know when they will finish,” he said.

Mr Cheewapap added that his office had encountered problems, specifically what he called “communication difficulties” with investigating Mr Gautier’s house.

“The man will not let my officers inspect the area around his house although they have presented him with a search warrant,” said Mr Cheewapap.

Mr Narit, a Democrat Party MP for Phattalung, told park chief Cheewapap, “The investigation teams should have their work completed within a month. After that the DNP teams will start to examine the land ownership documents of all 379 plots along the national park border.”

“I want every National Park chief in Thailand to review their park boundaries and clearly mark them, so that when any developers try to encroach on national park land, it will be obviously noticed and easier for the officers to inspect and take legal action against them,” he added.

DNP Director-General Damrong announced during an inspection visit to Phuket on Wednesday that he will assign hundreds officers to investigate 379 plots suspected of encroaching on more than 3,000 rai of land in Phuket’s Sirinath Marine National Park.

A total of 366 DNP officers, split into teams of six, will investigate suspect plots along the border of the national park.

His officers will be tasked with investigating their assigned plots, coordinating with the Public Sector Anti-Corruption Commission (PACC) investigation also currently ongoing in Phuket, filing complaints with police and presenting their cases in court, Mr Damrong said.

“Any land document issued after 1964 will be considered illegal. Landowners will have to fight in court if they want to prove that they legally own the land in question,” warned Mr Damrong.

He added that the officers to be assigned the Phuket blitz will also be used in crackdowns elsewhere in Thailand.

“I will start with Sirinath National Park, which I believe we can start investigating by mid-October. However, I will have to train those officers about investigation procedures and educate them on the relevant aspects of the law,” he said.

Directing his vision to after his impending retirement, Mr Damrong said, “I hope the new DNP Director General will continue my work, otherwise that person will have a lot of explaining to do to the public.”

Phuket Town basks in the glow of the Moon Festival