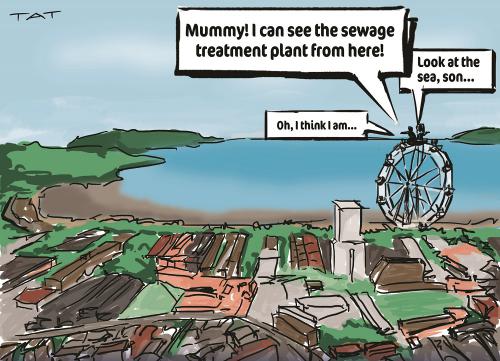 PHUKET: Reports that Patong Municipality hopes to install a huge Ferris wheel along the beach road have generated considerable interest within Phuket’s large and ever-growing expat community, and some skepticism with regard to the cost/benefit of such an erection.

But the fact that this is even a serious topic of discussion clearly demonstrates just how good we have it here in our little Andaman paradise.

Veteran Phuket news consumers simply do not realize how spoiled they are to live in a place where, as a Formula 1 broadcaster once put it: “Anything can happen, and it usually does.”

As we slide headlong into high season, the burning question appears to be a trivial one: Do we really need a huge Ferris wheel along the Patong beachfront?

This is a first-world problem of the first order, so much so that we should should consider ourselves fortunate to be involved in such frivolous debate, particularly at a time when millions of angry Thais are blowing whistles at each other, draping themselves in flags (or red shirts), hurling “cracker bombs” or otherwise engaging in futile, counter-productive behavior which threatens to tear the nation apart.

But here in Phuket, and especially Patong, the issue our expat community seems to find most important is that of the Ferris wheel, which we are now informed is more correctly referred to as a “Giant Observation Wheel”.

Giant Observation Wheel on the Patong beachfront: Good or bad? Right or wrong? Up or down?

At considerable risk of bucking the politically correct trend, I boldly state: Giant Observation Wheel in Patong: BRING IT ON!

Never mind tsunamis, military coups, SARS, murdered tourists, AIDS, tuk-tuks, whatever… the pleasure train is simply moving too fast to jump off now, so it is incumbent upon us to double down and ride it to its logical conclusion – and hopefully it will not end with a Giant Wheel of Misfortune in the middle of a tsunami evacuation route also known as Soi Bangla.

Patong Municipality, please remember: Once you opt for tunnel vision, don’t be surprised if you’re blind sided by reality.