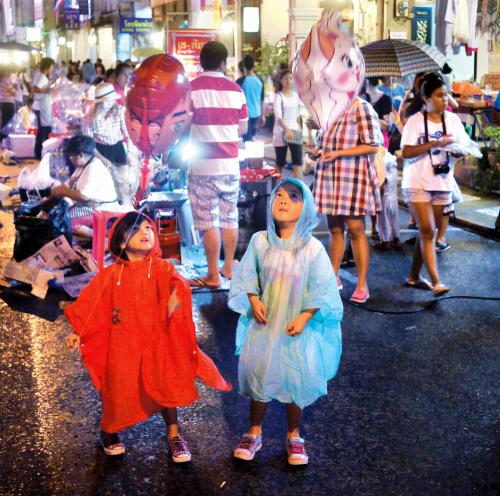 PHUKET: I read the article written by Don Limnun-thaphisit regarding the Lardyai walking street (story here). However, I did so after stumbling upon the event by chance last weekend.

I expected another of the ubiquitous Thai markets with fried chicken, cheap knock-off goods and blaring dance music. What I discovered was a place with much more character.

A plethora of small food stalls cooked up meat and vegetable skewers, Thai omelets and especially tasty fresh spring rolls. There were some clothes and other goods being hawked but what I noticed was a much different mood altogether from other weekend markets and fairs.

The colored lights illuminating the old architecture set a festive tone, and it had a family-feel, with lots of kids running around having fun, screeching and howling with laughter.

Live musicians and street performers made it feel less like a consumer event, and although there is plenty of shopping, it is a place people are going just to hang out and have a good time.

The crowd was markedly Thai, with a distinct lack of tourist hordes, which was surprising at this time of year. If Mr Limnun-thaphisit’s statistic that only one per cent of visitors to Phuket make it into Phuket Town is correct, this is a shame.

Although Phuket is somewhat of an anomaly in Thailand with it’s large expat population, high prices and slightly diluted culture, in Phuket Town we can still feel the beating heart and the cultural soul of the island. The architecture, people and food speak to a distinct history and exhibit a character that cannot be experienced within the confines of a five-star resort.

Phuket Town and Lardyai walking street are an ideal alternative for vacationing families who want to escape the kid-unfriendliness of Patong’s party scene and raucous nightlife and enjoy a hiatus from high decibels and scantily clad katoy. It’s quick work finding a place to park and there are a variety of chic cafes and small pubs to take a load off, shoot the breeze with some locals and watch the world go by.

I wholeheartedly agree with Mr Limnun-thaphisit that visitors to Phuket are doing themselves a disservice by hiding out under their beach umbrellas and not exploring the charms of Phuket Town.