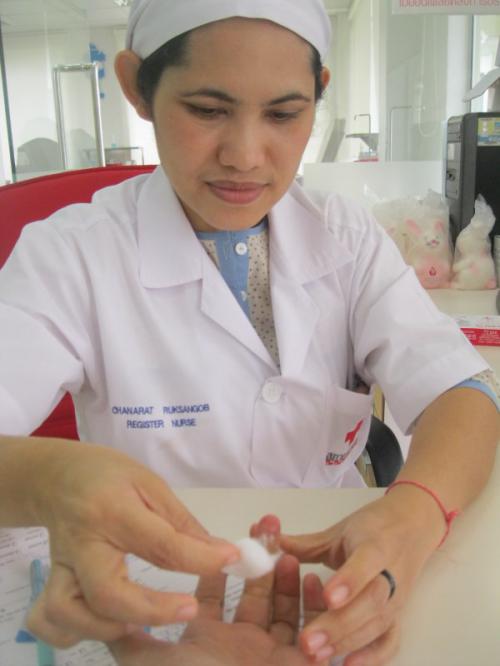 Pim Hoogeveen, a 61-year-old Dutchman, offered his blood to save a life. He responded to an urgent call for A-negative blood donations. His donation was refused.

The Phuket Gazette’s Shela Riva investigates the process behind donating blood on the island – the restrictions and the rewards.

PHUKET: The recent call by the Phuket Regional Blood Center (PRBC) for A-negative blood during the high season, which is usually spattered with Westerners entangled in motorbike accidents, is reminiscent of a life that was not saved about six months ago.

The man Mr Hoogeveen tried to save was the late Marc Harrington, a 66-year-old British expat who sustained a serious head injury on June 22.

Three weeks after the accident, Vachira Phuket Hospital appealed for blood donors. A second call was made on July 30 (story here), to which Mr Hoogeveen was prompted to respond.

“I called the PRBC, willing to donate some blood. To my surprise, they refused my offer because I am too old according to the Thai standard,” he told the Gazette shortly after the rejection.

“Hopefully they will notify Mr Harrington or his family about this age-standard, so he knows there is A-negative blood available, but he won’t receive it.”

Mr Harrington unfortunately never received this information as he succumbed to his head injuries on August 13 (story here).

Why he wasn’t allowed to donate

The PRBC confirmed to the Gazette that first-time donors must not be more than 55 years of age. Only those who have donated previously may donate after the age of 55, provided they have a doctor’s approval.

“We cannot accept donors older than 55 who have never donated blood before, even if they otherwise fit the criteria,” PRBC nurse Chaleewan Wichadit said.

PRBC Director Pornthip Rattajak explained, “After donating blood, the donors’ bodies compensate for the loss of fluid. If the donor is too old, the compensation mechanism will not be as efficient. There is a higher risk of fainting or unconsciousness, especially for a first-time donor.”

“If you donate every three months, your body will be habituated to compensating. If you donate for the first time and you are older, the body may respond in shock or fear.”

Other reasons for refusal

Other restrictions are in place to protect the health of both donors and recipients, explained Ms Pornthip.

Some of the factors that could put the health of the donor at risk are being under the age of 17, being older than 70, weighing less than 45 kilograms or being pregnant.

There are far more restrictions intended to protect the recipients. They are presented on a questionnaire donors are asked to fill out before each donation.

PRBC will not accept donations from those who: lived in the UK between 1980 and 1996 for a period of six months or more, or have had sexual contact with the same gender.

Even healthy people may be turned down if they have consumed alcohol in the 24 hours leading up to donation or taken medications containing aspirin within three days of donating.

The final protective screening takes place at the time blood is drawn, when three test tubes are filled with blood to test for HIV, syphilis, and Hepatitis B and C.

The demand for Rh-negative

Although the PRBC receives about 2,000 standard units (450cc) of blood per month (people weighing less than 50kg may donate only 350cc), it has an almost constant shortage of all four Rh-negative blood groups: A-negative, B-negative, AB-negative and O-negative.

“Only 0.3 per cent of the Thai population have blood that is Rh-negative,” said Vathu O-art, PRBC Public Relations and Blood Recruitment Coordinator.

“If only one person with Rh-negative blood gets into an accident, it can take up to five units of blood to help them, which exhausts our stock quickly,” said Ms Pornthip explained.

Sixteen per cent of the world’s population has Rh-negative blood, 40-50 per cent of which are Europeans, but the PRBC rarely benefits from these statistics.

“Ninety-seven per cent of our donors are Thai locals,” Ms Vathu explained.

Remarkably, given the regular need for Rh-negative blood and the higher incidence of this blood type among Europeans, donations from tourists are generally not accepted.

As a result, Rh-negative donors at the PRBC make up about three in every 1,000 donations.

Why tourists may not donate

Despite the fact that foreigners are much more likely than Thais to have Rh-negative blood, the rules of the Thai Red Cross do not allow the PRBC to accept donations from tourists, Ms Pornthip said.

One reason is that travel increases the risk of exposure to disease.

A second reason is that those who donate blood must have a permanent address in Phuket.

“In rare cases, perhaps under emergency circumstances or if a family member of a tourist recipient is here with them and wishes to donate, the doctor may consider accepting their blood.”

However, the PRBC does accept expatriate donors, but the expat must have lived here for six months before donating.

To ensure there is enough blood available for all recipients, particularly Rh-negative blood types, the PRBC maintains a wide network of sources across Thailand.

“If we don’t have a particular blood type in stock, we can request it from other provinces. Here in the South, we have 12 blood banks distributed across three provinces: Phuket, Nakhon Sri Thammarat and Songkhla,” said Ms Pornthip.

“We can also request it from the Bangkok blood center and the Thai Red Cross.”

The Rh Negative Club also plays a role in making sure those who need blood receive it.

“The Rh Negative Club is a local group of donors who have supplied us with their contacts. When Rh- negative blood is needed, we can contact them,” said Ms Pornthip.

“On paper, there are about 150 members in the club. We now have about seven Rh-negative club members who come in regularly to donate.”

Between club members and other donors, the PRBC receives an average of 10 units of Rh-negative blood per month.

When these donations are not enough, the PRBC appeals to the public for donors.

Ms Pornthip explained that it isn’t always necessary to match recipient and donor blood types, and that every donation is valuable.

“However, in an emergency, the doctor may decide to use O-negative blood.”

Just as O blood is the universal donor, type AB is the ‘universal recipient’ and can receive blood from any blood type as

Thailand third worst in the world for road deaths; Phuket killing someone every three days