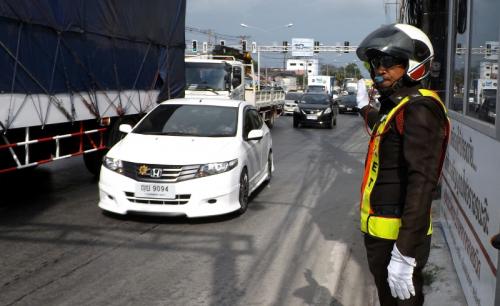 PHUKET: Phuket City traffic policeman Pol Sen Sgt Maj Boonliang Maneewong, 53, is from Sisaket province in the Northeast. He graduated from the Provincial Police Training Center Region 2 in Chon Buri province in 1984 and has been working with the Thalang Police since 1985.

He has been a traffic officer for 20 years, and for the last three years he has been posted at the Koh Kaew traffic lights. Here he talks about the Koh Kaew Intersection, one of the busiest on the island, and shares his ideas about how to improve traffic flow.

People stopping to buy items from roadside vendors causes some of the congestion around the Koh Kaew Intersection on Thepkrasattri Road. The other main issue in the area is people carelessly driving – they need to pay more attention to traffic instructions and regulations. If people took more care when they were driving, it would solve many traffic problems.

For example, drivers should not increase their speed when they see a traffic light turn yellow. Everyone knows that when the light is yellow you are supposed to slow down and prepare to stop.

People need to keep the traffic laws in mind and follow them. I think everyone knows what’s right and what’s wrong. They just ignore what’s right sometimes to make their lives easier. They forget that other people are using the road too, and that they should be considerate.

The intersection on Thepkrasattri Road at Koh Kaew is one of the busiest on the island. Not only is Thepkrasattri Road the only route off the island, but it’s the main road to the airport. In addition, there are businesses and residential areas along it in Koh Kaew, as well as a market. These make the area even busier. The traffic is the worst from 7 to 10am and from 3:30 to 6pm.

Traffic gets slowed down between these times mostly because of drivers’ behavior and the size of the road. If the road were significantly wider, it would make a big difference. However, as it is, drivers must modify their behavior and obey traffic laws.

My job is to serve the people on the road, not arrest them. All my attention goes to making the traffic flow as smoothly as possible.

I don’t have any secrets for doing the job well, I just try to do my best and use my judgment in deciding how to direct traffic. Sometimes I have to let motorists go through a red light to promote traffic flow.

Please understand that according to the law, if a traffic policeman is present, motorists must obey him, not the traffic lights.

The best way to solve the traffic problems would be to widen the road or rebuild it to improve flow. It’s such an important and heavily used road. But I don’t know when that will happen.

In the meantime, I’ll just do my best to keep traffic flowing.

Phuket Opinion: Praise for the little ‘Heroes’ of Phuket