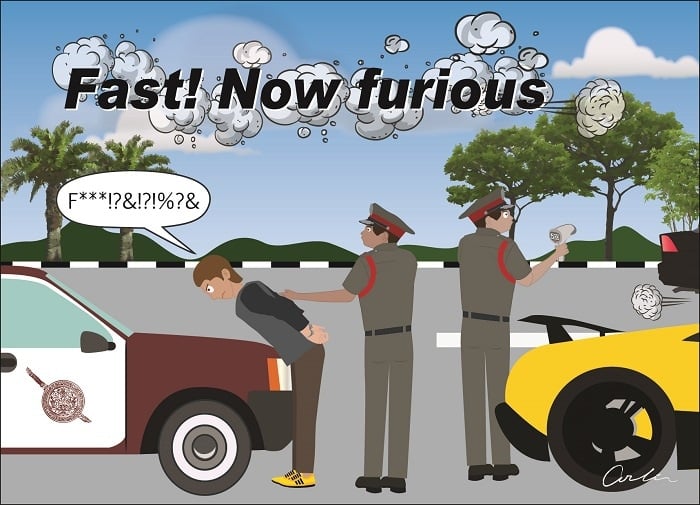 PHUKET: Efforts to crack down on speeding and other forms of reckless driving took a turn for the serious recently with the news that the Phuket Provincial Police Office is seeking assistance from the Royal Highway Police to set up radar-equipped ‘mobile units’ to help catch offenders (story here).

Phuket has emerged as seventh in the nation for the most road accidents – and would probably lead the nation in road deaths if such grim accounting were done on a per capita basis.

The island is perhaps the perfect storm when it comes to Thai-style road chaos. A cornerstone contributing factor is our sad legacy of failing to provide convenient and affordable public transport options to the millions of visitors, foreign and domestic, who come here every year.

The lack of public transport forces many tourists to [illegally] hand over their passports to rent cars or motorbikes, which can be rented out for as little as 150 baht per day. The paltry sum is the ticket price to one of the most dangerous reality shows on the planet: Phuket’s poorly-designed and ridiculously marked road system, where so-called ‘professional drivers’ rocket past unlicensed, disoriented holidaymakers.

Every country and locale has its own ‘driving culture’, with rules of road etiquette that are generally understood by the vast majority of motorists. A perfect example is the flashing of headlights during daytime hours. In the United States, this means: ‘Go ahead. I will slow for you’. However, in the Land of Smiles it seems to mean: ‘If you pull out I am prepared to ram you, full speed.’ What a recipe for disaster for those who fail to get a debriefing before hitting the streets.

Anyone who has ever driven in a foreign country knows that it is best to proceed with great caution until the local rules sink in. Here in Phuket, however, there seems to be no real ‘driving culture’ because the vast majority of drivers are not from the area. It seems that everybody is just programmed to get from point A to point B as quickly as possible, which entails a great deal of rude, aggressive and dangerous driving behavior.

Most experienced Thai drivers can make the adjustment from Bangkok-style to rural-Thai driving mayhem, but Phuket is a dangerously unpredictable hybrid that seems to offer the worst of both worlds – bundling together gridlock traffic jams and road rage with rural touches, such as meandering buffalo and ghosting suan lan, to name just a few of the myriad of random elements one must be prepared for at all times.

Efforts to ‘slow down the pros’ – airport limousines, taxi drivers, mini-van drivers and tour buses – have been an abject failure because the locations of all four permanent speed radars are well-known to them. Even if they are caught, the 1,000-baht fines are ridiculously low and the Land Transport Department remains powerless to revoke the licenses of the majority of drivers who simply ignore the tickets (story here).

The current system of police checkpoints generates revenue for police districts, but does nothing to slow down speeders. The Gazette has long championed a more realistic approach. We hope that the national Highway Police will take action on this reasonable and long-overdue request from our Phuket provincial police.