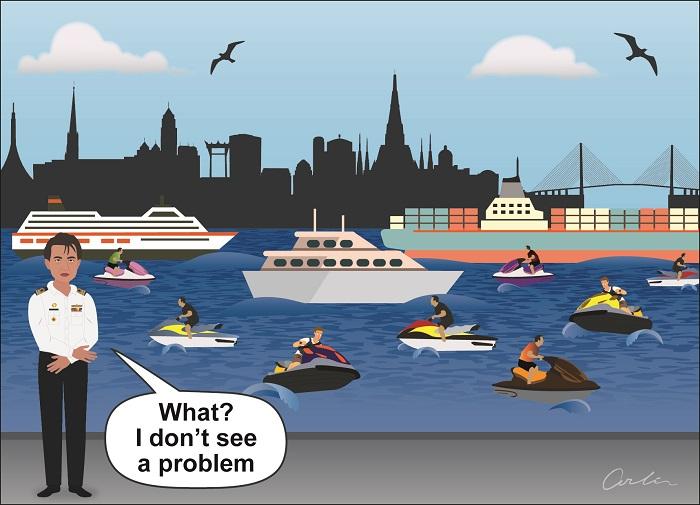 We hope whoever is assigned to replace former Phuket Marine Office Chief Phuripat Theerakulpisut will make tourist safety a real priority and begin to clamp down. The problems that the jet-ski rental industry brings with it has done so much damage to Phuket’s image as a safe and attractive tourist destination over the years.

News of Chief Phuripat’s transfer to landlocked Nonthaburi province came as a surprise to many, especially given the fact that his star appeared to be on the rise when he was promoted to the lofty position of acting director of the Marine Office Region 5 on October 1 last year, the beginning of fiscal year 2016. That role empowered him to oversee marine safety issues not only here in Phuket, but also the other five Andaman coast provinces of Phang Nga, Krabi, Trang, Ranong and Satun.

Chief Phuripat’s transfer to Nonthaburi, through which the Chao Phraya River flows on its way to the capital, can hardly be seen as a lateral move. It does, however, fall far short of the thorough investigation into his personal finances called for in this space during his six-year reign as Phuket Marine Chief.

Regardless of the trajectory of Chief Phuripat’s future career path, the good news is that Phuket now enjoys a long-overdue opportunity to begin better enforcement of safety measures on rented jet-skis that were blatantly disregarded during the former Chief’s tenure, sometimes with tragic or even fatal results.

These include the rental of jet-skis to minors or individuals who are drunk or otherwise obviously impaired, allowing jet-ski operators to conduct private business on public beaches where all other forms of commerce have been banned, failure to revoke jet-ski licenses for operators found seeking business outside authorized zones, and so on.

The list of jet-ski transgressions that have been carried out with impunity in recent years is simply too lengthy to be comprehensively listed in this space.

The Gazette would also like to extend our thanks to the many foreign diplomatic missions that helped keep up the pressure and continued to lobby the central government to do something about Phuket’s notorious jet-ski scams after the National Council for Peace and Order (NCPO) took power in May 2016.

In particular, we would like to pay our last respects to the late Honorary Consul from Germany Dirk Naumann, who passed away last month from cancer. Mr Naumann was among the most vocal critics of the jet-ski rental industry in Phuket, calling on numerous provincial governors to do something about the sorry situation.