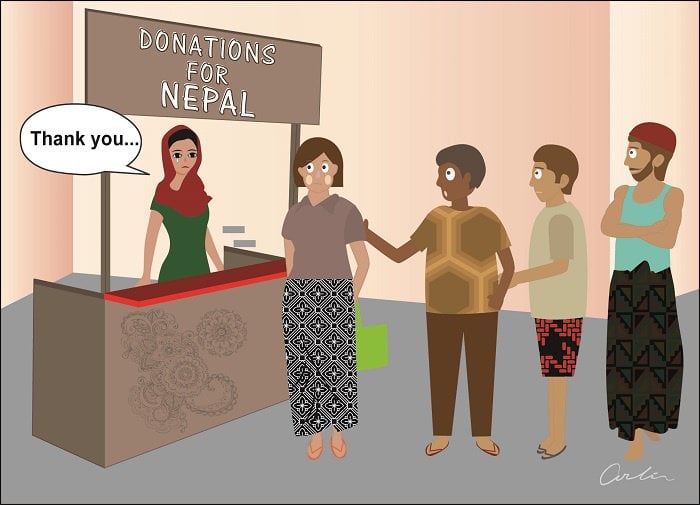 PHUKET: Island residents must come together to fully support local efforts by the Red Cross Society and private-sector groups to provide disaster relief to the suffering people of Kathmandu and other parts of central Nepal that have been devastated by the massive earthquake that struck there last Saturday morning.

As of yesterday, the reported death toll had surpassed 6,000 and was continuing to rise steadily as emergency relief and medical aid teams from around the globe began to reach the remote, mountainous region.

Images of dust-covered survivors lying in makeshift tents – or even out in the open across the ancient city’s crumbled remains – highlight the costly damage of the quake, as well as the terrorizing effect of the aftershocks that continued for days after.

As with the Haiti and Fukushima Japan earthquake disasters in 2010 and 2011, respectively, the Thai government has correctly joined the international community by taking quick action to help in what will surely be a long and difficult relief and rebuilding effort.

By Monday, over 350 Thai doctors had reportedly volunteered their services through an online campaign organized by the Medical Council of Thailand, while the Thai military quickly arranged air transport for the five-hour flight from Bangkok to Kathmandu for a wide variety of relief measures by the Thai ministries of commerce and public health, as well as other agencies.

Much like the days following the 2004 tsunami disaster, a feeling of dread hangs in the air as the effects of the 7.9 Richter quake on more remote, mountainous communities have yet to be reported.

Many ethnic Nepali residents here in Phuket have yet to know the effects of the disaster of their relatives back home. Unbeknownst to many residents of Phuket, ethnic Nepalis comprise a large segment of the island’s foreign workforce, especially in the tourist areas along the west coast.

Even as relief workers continue to pour into the impoverished country of some 28 million, many survivors who can afford to are flying out in what has already been described as a mass
exodus.

The Thai Immigration Bureau, Foreign Ministry and other related agencies should work together to develop comprehensive and humane policies for what could be a large influx of Nepalis, given Thailand’s relative proximity and well-established social and cultural links.

Even more importantly, they should be ready to pounce on any human-trafficking miscreants who might try to derive personal profit from this latest terrible disaster.