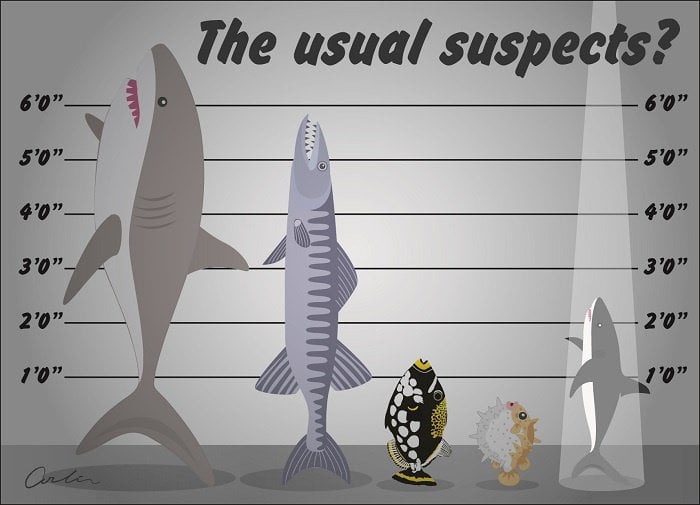 PHUKET: We send our condolences to Australian tourist Jane Neame, whose recent visit to Phuket was marred by one of the most unlikely of accidents: a shark bite.

We are impressed with the way the Australian, who is six months pregnant, took the injury in stride. We hope island residents and visitors react in kind, not unduly panicking over what appears to be a very isolated incident – the first of its kind that we are aware of in 23 years of reporting news on the island.

Soon after the incident, one of Phuket’s most highly respected marine biologists said he would advise the Governor’s Office to issue a warning to tourists “in affected swimming zones” if the injury were confirmed to be the result of a shark bite. While the Gazette was the first to obtain such confirmation, we strongly advise against the issuance of such an advisory, on several grounds.

For a start, the statistical likelihood of sustaining a shark bite in local waters is miniscule.

The irony of being bitten by a shark here in Phuket appears to have been fully appreciated by the stoic Ms Neame, who comes from Queensland, Australia, where fewer than 100 shark bites have been recorded since 1855 – about a quarter of which were fatal.

But even throughout the vast shorelines of Australia, the incidence of fatal shark bites is about one a year – yet this is still enough to make the country a world leader in this regard.

The sad reality is that more people probably die annually by ignoring red flags and drowning off Phuket beaches than are taken by sharks worldwide. And the likelihood of Phuket beach swimmers being killed or injured by jet-skis or longtail boat propellers greatly outweighs that of succumbing to any of the combined threats local marine life might pose: from jellyfish stings to barracuda bites.

As humans, we are wired for worry. Going back countless eons, our ancestors faced daily threats so grave that we can hardly imagine them in this age of digital information and ubiquitous factory-produced food that has allowed even some economically destitute people in developed countries to become morbidly obese or crippled by diabetes.

Despite the relative lack of real threats, huge swaths of our cerebral real estate remain devoted to threat detection and avoidance. These mental resources are still firing in our heads at all times, which is precisely why deaths resulting from anti-depressants and other prescription medications now surpass those from recreational drug use in most developed countries.

It also goes a long way to explain the sad prevalence of so many half-baked conspiracy theories: with a relative lack of any real threats, our brains invent things to worry about to keep these neural networks active.

The reality is that, for the vast majority of us, the danger of going into cardiac arrest while watching an installment of Sharknado is greater than that of actually being taken by a shark off a Phuket beach. The last thing we need is an official announcement that the situation might somehow be otherwise.