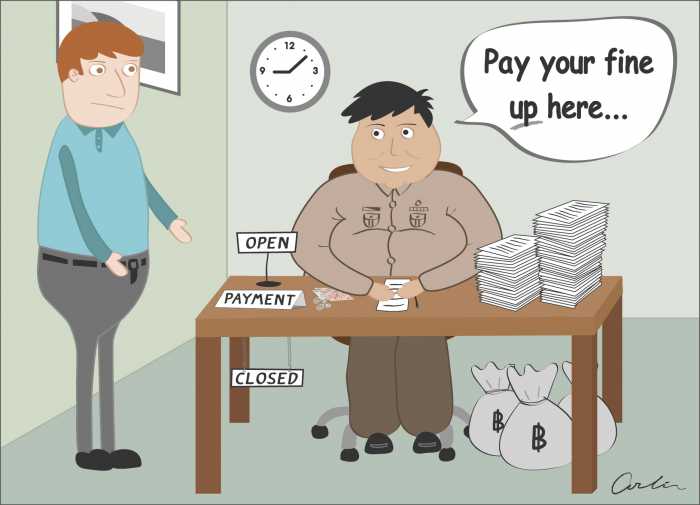 PHUKET: The allegation of a 5,000-baht fine levied against a tourist for illegally parking a motorbike in a restricted zone in Karon (story here) raises several issues about the future role of local administrative bodies, both in terms of how they raise revenue and how they use these funds.

The fact that Karon Municipality now appears to be taking a more active approach to issues such as public parking seems like a step in the right direction, especially when compared with the pre-coup days when “who could park where” in the town was largely decided by illegal transport syndicates – regardless of what the public road signs indicated.

“If you park here, we cannot guarantee the safety of your vehicle,” was a standard threat for years by these self-entitled thugs, who would very often go ahead and vandalize the vehicles of owners who failed to heed the threats.

The crackdown on Phuket mafias earlier this year is likely to have greatly reduced some individuals’ income from actions such as divvying up the beaches to be rented out to vendors and colluding with the tuk-tuk mafia.

So it should come as little surprise if such officials were to turn to other revenue opportunities, which might include leveraging genuine laws to their advantage, such as issuing more parking tickets, fining more people who pollute the environment, and so on.

In theory, better enforcement of some provisions of the long-ignored Public Health Act of 1992 could improve traffic flow and make our roadways safer and cleaner, as well as improving the island in many other ways.

But if these measures are now to be more strictly enforced, the municipalities doing so must first be ordered to launch a public-relations campaign to give the public some advance warning about what might be in store for them.

As just one example, people caught spitting in public in Karon could be subjected to a fine of 2,000 baht. Clear information about this should be made transparent to visitors; otherwise, excessive fining of tourists who do not know the rules could further damage our reputation as a holiday destination.

Just as importantly, officers who issue these fines should do so under the “spirit of the law”, not as a way of shaking down the tax-paying members of the public in order to keep their municipal (or other) coffers at desired levels.

With Phuket’s ever-increasing traffic congestion, it would be especially beneficial to issue more tickets to motorists who commit infractions that slow traffic flow, such as those who selfishly double-park along key arteries or operate the many illegal salaeng (motorbikes with sidecars), causing tailbacks.

Finally, and it goes without saying, all fines should be issued in a fair and transparent manner, with a receipt for the correct amount issued immediately upon payment. Any other approach opens a new avenue for official corruption. Most readers would agree that we have had enough of those already.

The Iermakov affair: Where the Thai police and the Army make strange bedfellows