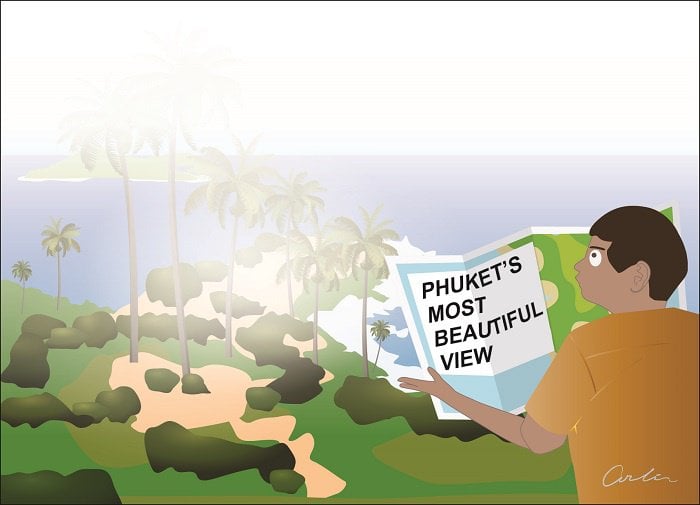 PHUKET: The unprecedented expanse of smog blanketing Phuket in recent months has quite rightly trained the spotlight on Indonesia, where out-of-control forest fires continue to belch smoke into the atmosphere at a dangerous rate.

Although illegal in Indonesia, ‘slash-and-burn’ land clearing techniques that set off these annual conflagrations have long been a source of friction between Indonesia and its neighbors, particularly Singapore and Malaysia.

The past several weeks have given us here in Phuket yet another bitter taste of what these neighbors have suffered for decades: respiratory problems, burning eyes and skies so white that not even the sun can be clearly seen.

It’s darkly ironic that this immense pall befalls us in the run-up to the highly-touted advent of the Asean Economic Community (AEC), the terms of which will take effect less than two months from now.

The Association of Southeast Asian Nations (Asean), the well-funded but ineffectual regional bloc leading all the fanfare, has as its motto: ‘One Vision, One Identity, One Community’.

But if there really is a shared vision, it is a hazy one indeed. The sad reality is that the regional smog problem is probably the single most tangible and obvious factor uniting all member states. Perhaps Asean should prepare to issue surgical masks bearing the group’s proud emblem as a sign of unity as the big day approaches.

The truth is that Asean functions as more of a rich boys’ club than any real instrument of integrated, regional development. Its self-stated raison d’etre is that no member state shall interfere in the internal affairs of its neighbors. In this regard, the bloc has been a success – much to the delight of human traffickers, illegal fishermen, fuel smugglers, drug dealers, arms traders and the many others who thrive in the margins of lawlessness that the AEC would appear dedicated to prolong, rather than eradicate.

This ‘what happens in Vegas stays in Vegas’ mentality might have made sense a few decades back when regional stability could not be taken for granted, but it has no place in 2015 and beyond. In an increasingly globalized world, our leaders need to speak out and take action when their neighbor’s dumpster is on fire.

Popular Indonesian leader Joko Widodo was recently quoted as saying it would take ‘at least three years’ before regulatory changes could be put in place to end the current dynamic. This is not good enough. The fires have already sent up in smoke thousands of square kilometers of the world’s most precious forest, with the annual blanket of toxins created by the arsonists inevitably delivering hospitalization and life’s final breath to so many of their neighbors.

As Asean has been powerless to affect change on the issue, it is time for leaders in Singapore, Thailand, Malaysia and other affected nations to act independently to protect their own people. They should consider economic sanctions, such as trade bans on pulp and paper products, in order to ‘encourage’ the Indonesians to end these cataclysmic fires and protect what remains of the world’s vital virgin rain forests.

Island View: Indication of the inconsiderate