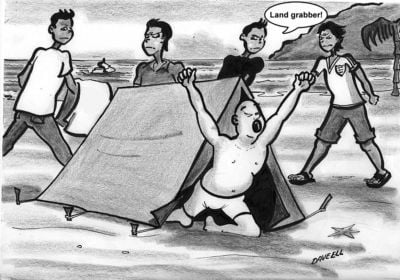 A recent front page story in the Bangkok Post claiming foreigners control 90 percent of Phuket’s beach land through Thai nominees stopped many expats in their tracks.

The truth of the claim – by the authors of a new study into foreign land ownership in Thailand – is difficult to verify.

The authors of the research, a team from Sukhothai Thammathirat Open University, gathered their evidence from the private sector, local government, the Board of Investment, the Land Office, the Chamber of Commerce, the Industrial Council and Immigration among others.

This is not the kind of research that can be readily repeated by a newspaper interested in getting to the truth of the matter.

But many of those who read the Post‘s story will have perceived – rightly or wrongly – a tone of xenophobia.

A nuanced 43-page report on foreign ownership of land in Thailand was boiled down to an explosive headline that was bound to put expat residents here on the defensive.

In fact, similar claims are made in the Thai press regularly.

The debate over foreign ownership of land in Thailand is one that has raged for years, and now more so than ever.

The Department of Special Investigations is reported to be investigating the claims, while the Agriculture and Co-operatives Ministry is said to be drafting a bill to prevent such land grabs.

Of course, this is not to say Thailand does not have the right to protect its most vital resources from foreign control.

Food security is likely to become an increasingly pressing issue in a world most experts agree is getting warmer, and everyone agrees is getting crowded.

But so far, rumors of these illegal buyouts have remained just that.

Meanwhile, the authors of the Thailand Research Fund study admitted foreign investment capital was essential for developing Phuket and other tourist resorts in Thailand.

This investment has turned Phuket into the most affluent province in the Kingdom.

Despite reports that Thailand is no longer in recession, the island’s property market – responsible for so much of that affluence – is still suffering.

Thailand is now more divided than at any time since the seventies.

The country needs unity, but stoking xenophobia is not the right way to bring Thais together.

It’s the right way to drive away the investment that Thailand, and Phuket in particular, needs.

OPINION: Do foreigners really own 90% of Phuket’s beach front?