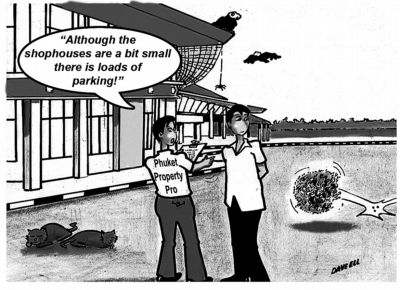 PHUKET: Thailand has a long history of public works projects that are fully completed and ready to serve the people, but then stand idle while the various forces involved squabble over division of the associated spoils.

Here in Phuket, we have two important projects that fall into this category, even though authorities in both cases had plenty of time to settle the issues that now prevent these facilities from opening.

The first of these is the new Phuket Provincial Bus Terminal on Thepkrasattri Rd southbound in Rassada [See story in this week’s Phuket Gazette. Digital subscribers click here.]

Completion of the terminal, built at a cost of 128 million baht, was a milestone given the amount of time it took to become a reality.

The Phuket Land Transport Office had been aware for well over a decade that having scores of large inter-provincial buses lumbering through the narrow streets of Phuket Town to reach the old station was untenable, especially given ever-worsening traffic congestion in the town center.

When the station was finally completed and handed over to the Land Transport Department on December 4 last year, there was little of the pomp-and-circumstance that usually surrounds such an event.

Now, three months later, the facility remains deserted and neither Rassada Municipality nor the Phuket Provincial Administration Organization (PPAO) are interested in operating it.

This strikes the Gazette as unusual. Such facilities – and the right to administer the many concessions that go along with them – are generally the types of projects local administrative bodies love to sink their teeth into.

But the powers-that-be in Rassada Municipality say they are ‘not yet ready’ to take over administration of the moribund station.

Even worse, the PPAO, which has shown real commitment to improving public transport with its ‘pink bus’ service in Phuket Town, is also reportedly not interested. As a result, it now appears Phuket will have to wait three more months, at least, before the Land Transport Department opens the station under its own administration.

Even harder to explain is the situation on Ranong Road where the 167-million-baht Fresh Market that was completed early last year has been sitting idle for more than a year now.

Phuket City Municipality said throughout 2009 that they wanted to wait until ‘everything was in order’ before opening, but surely a year should be more than enough time to broker a solution to whatever impasse lies between the municipality and the vendors.

With such large amounts of taxpayers’ money involved, the public deserves better performance from its elected officials.