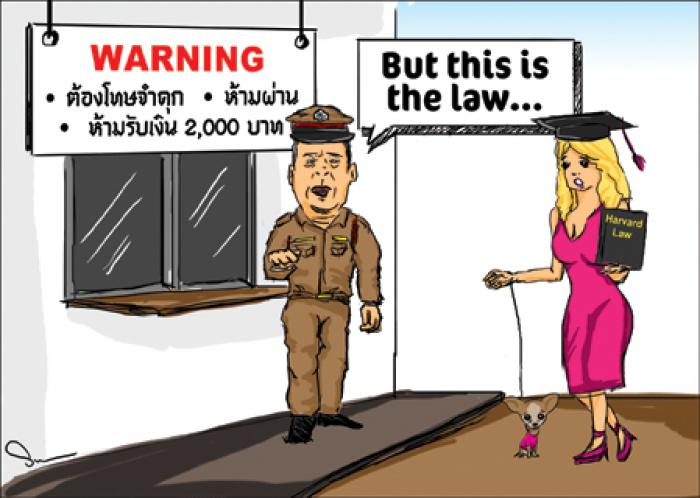 PHUKET: The news stories that have spilled across the pages of the Phuket Gazette over the past few weeks have thrown into sharp relief what it takes for a foreigner to live on this paradise island.

A Russian woman who had made her home here being refused re-entry to Thailand last month because officers from the Immigration Bureau suspected her of working while staying in Phuket on a tourist visa says it all (story here).

For the love of a legal justice system, and after all the arrests and deportations that the Gazette has reported over the years of foreigners caught working illegally, one would think the mighty Immigration Bureau would have arrested her before she left the country.

Nope. And did the Royal Thai Police perchance inform the Ministry of Foreign Affairs that this woman was suspected of working illegally in Thailand?

Apparently not. Instead, Immigration has now thrown into doubt any confidence a long-stay foreigner may have of successfully completing a visa run and returning to live in his or her own – fully paid off – home.

Every time another crackdown is launched, local government agencies issue the same mantra: “The law is the law… We only want to catch the bad guys.”

Bully for them, if only it were true. Not a single law-abiding expat on the island would argue with catching bad foreigners. “Go get them!” we can hear them cry.

These laws apply only to foreigners, and it is the foreigners who must understand them. Yet not a single law in the country is officially translated into English – or any other language – leading to the abyss of “misunderstanding” that has been abused not just by bad foreigners, but also corrupt officials.

Officials like those officers at the Chalong Police Station recently identified by the Public-Sector Anti-Corruption Commission as having extorted dive instructors (story here), and the Patong Police, under investigation for letting people who open fire on a public street walk free (story here).

Despite what any good-willing Thai official may publicly declare is right or not, the hard truth is that every foreigner on the island remains at the mercy of the official standing right in front of him or her at any time of day, applying his interpretation of the law.

As long as suspicions, loopholes and personal gain are part of that interpretation, the laws of the nation cannot receive the respect they deserve, and the foreigners who legally make this country their home cannot be completely without anxiety about their status.

Phuket kids to save Karon