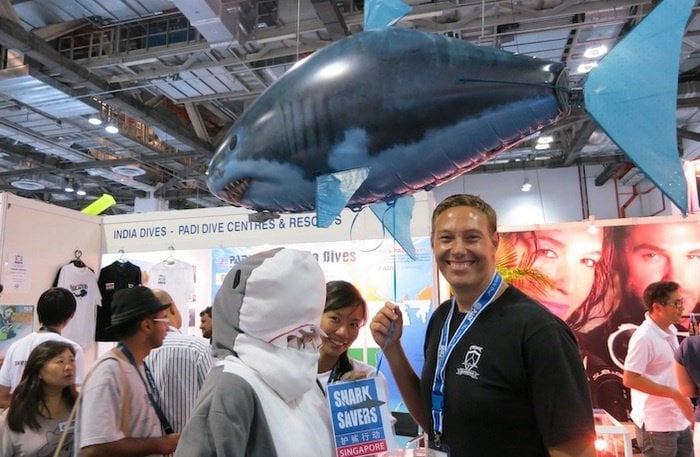 Brendon Sing, from South Africa, has been actively involved with shark research and conservation for more than 15 years. He has taken more than 5,000 dives, many with a range of shark species across the world.

Now, as one of the Directors of Shark Guardian, a United Kingdom-based charity for shark and marine conservation projects worldwide, he has been giving educational shark presentations to over 25,000 people a year, as well as conducting and assisting several citizen science projects for shark conservation worldwide.

PHUKET: The number of sharks sightings within the Thai waters of the Andaman Sea has greatly decreased in recent years. We have a moral obligation to protect sharks as they are one of the most important, advanced and amazing species of animals to have ever lived.

They are apex predators that have been in our oceans for over 400 million years. However, many shark species are now at risk of extinction due to human impact.

The Thai fishing industry has mostly targeted other fish species rather than sharks over the years. However, fish catch sizes and numbers are now dropping so much that fishermen have started targeting sharks for the shark product industry and taking greater risks by fishing inside national marine park boundaries.

The devastating decline comes from a combination of different issues, including overfishing, trawling, targeted shark finning, unregulated shark fishing, fishing in marine parks and coastal development, as well as natural issues, such as water temperatures rising

No matter what equipment used, overfishing of any species is a serious problem for the entire ecosystem. When enormous numbers of the sharks’ natural prey are removed from an area it forces them to migrate to new areas to find alternative food sources. However, some fishing equipment is much worse than others. In general, all types of trawlers used by fishermen are incredibly destructive and wasteful. This is particularly the case for sharks species that are either bottom dwellers or migratory.

As can be seen by the European Union’s concern with the fishing industry in Thailand, any unregulated fishing is problematic. We have the equipment and could leave entire regions without enough stock to repopulate. This is especially a problem for certain types of fish, such as sharks, that take a long time to reach a mature age and start reproducing. A number of regulations could be imposed that would have a positive impact on recouping the shark population in Thai waters.

Sharks should be landed with fins attached, to prevent wasteful shark finning; catch size regulations should be in place and enforced to prevent juvenile sharks from being landed; species that are protected through International Union for Conservation of Nature and Natural Resources (IUCN) Red List or other means should not be landed; all sharks landed should be logged by species, size, sex, and catch location to allow continued monitoring of sustainable fishing practices.

One major impact on sharks that the general public doesn’t seem to be aware is coastal development. Run-off from developments causes sedimentation on coral reef sites, which ends up killing what is well-known as one of the most bio-diverse ecosystems in the world. The destruction of mangroves for developments also affects shark populations, as they are the nursery grounds for many species of shark.

The most horrific practice that is more than decimating the shark populations of the world though is shark finning. Many shark species are vulnerable and threatened by extinction due to sharks being targeted for their fins fueled by the shark fin trade. It is estimated that between 70-80 per cent of the 100 million sharks killed each year is for the shark fin trade.

Sharks need protection as they are more vulnerable than many other species of fish and take much longer to reproduce. Therefore, it is very important to educate the public about the importance of sharks and the role they play in the ecosystem.

We developed the Shark Guardian Thailand eShark project to provide data to the Thai Department of Fisheries (DoF) and IUCN in order to highlight falling shark populations or possible increases in areas where there is better enforcement of laws.

This project has been pushed throughout Thailand for two diving seasons and we have gathered almost 12,000 data entries. The data is so important when governments try to make and enforce laws. The project allows past data from scuba dives, snorkellers and beachgoers, as well as present data to be uploaded on to a global database. Everyone can take part in this research, that’s what makes it exciting.

The DoF has been using this data to form their national plan of action for sharks. Our ultimate goal would be a shark sanctuary throughout Thai waters – you have to aim big!