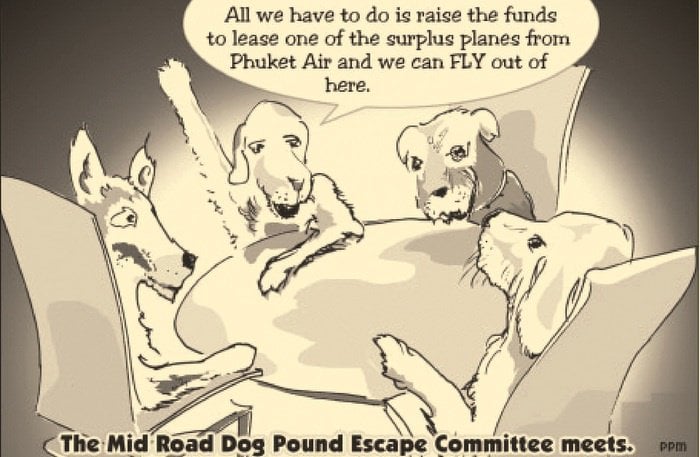 PHUKET: The Mid Road Dog Shelter – which really hasn’t gotten out of the dog house a decade later – was on the chopping block with the headline ‘D-Day looming for dog pound’ in the September 10-16, 2005 issue of the Phuket Gazette.

Just two months earlier, tough days for the dogs had made headlines with dwindling food supplies at the shelter – dogs were down to eating cat food. Now, it appeared that things were about to come to a head.

There was no doubt that having a dog shelter on the island was important. However, letters and emails howling about the canines’ quality of life had been pouring onto the Phuket governor’s desk.
The decision on whether or not the facility should be closed was to be made by the end of the month.

Of course since 2005, the Soi Dog Foundation and Paws have both made real impact on the stray dog population in Phuket – not quite Pied Pipers, but still, they developed sustainable, long-term and short-term programs.

Yet somehow, the dogs at Nai Harn Beach continue to cause waves – surf season and high season.
That being said, they are hardly causing the kind of Teahupo’o swell that the island’s first shark bite incident did last week.

The stray dog issue is of a far more serious concern than a bite from a small bull shark. Of course, the question is how many dog bites go unreported each year?

However, dogs simply don’t seem to have the same resonance with international media. Perhaps someone needs to write Jaws: Soi Dog Attack just to keep the pot stirring up properly.