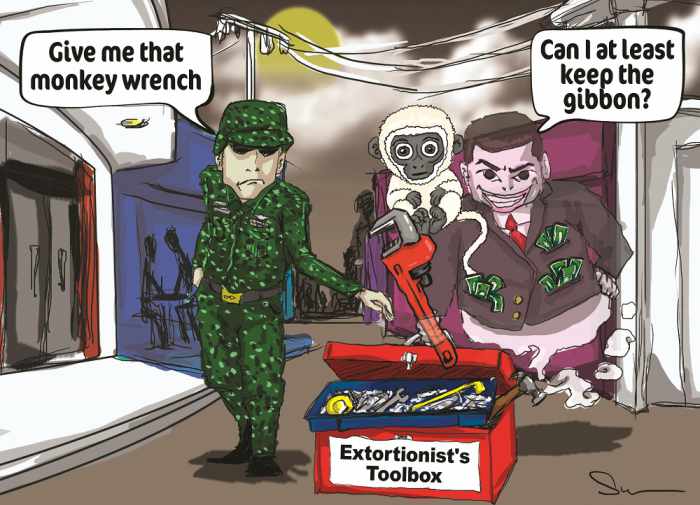 PHUKET: Even as the National Council for Peace and Order (NCPO) continues to roll on with its unprecedented and long overdue law-enforcement campaign, pressure inevitably continues to rise – both within the country and internationally – over when new elections will be held and democracy restored.

“Branding” a military coup is never an easy task, but images of a pristine Surin Beach free of encroachers (story here), demolished mafia taxi shacks in Karon (story here), and so on, have gone much further in swaying public opinion in support of the current “restart” than the public relations initiatives, such as the free concerts in the parks (story here) and even the free broadcasts of all World Cup matches.

Democratic development aside, many of the actions the NCPO has taken so far should be, and have been, widely and enthusiastically applauded. We fear, however, that as soon as elections are held the same old forces of corruption and cronyism will simply re-exert themselves in the ways they always have; that the current period will be remembered only as a brief interlude of sanity in an otherwise endless span of political discord, social disharmony and never-ending protest – hallmarks of a society with inadequate respect for the rule of law.

Thus the key question is: What steps can the NCPO take now to address the underlying issue of corruption in the long term, after they hand over control to the next civilian government?

A good place to start was the rolling out of provincial offices of the National Anti-Corruption Commission throughout the country this week, providing a distinctly independent channel for the NCPO to receive complaints of graft. The previous alternative was for victims to contemplate the consequences of attempting to report corruption to the very officers accused of being corrupt.

Another positive step would be to overhaul or do away with laws and regulations that are difficult or even impossible to enforce, but which nevertheless remain on the books and create a powerful “extortionist’s toolbox” for corrupt state officials and their elected counterparts.

Among them: the time restrictions on alcohol sales, brought into effect about a decade ago, during the Thaksin regime. Restricting alcohol sales to 2pm to 5pm has done nothing to reduce alcohol consumption or the various problems it can cause.

The restrictions were reportedly introduced to prevent kids from buying alcohol on the way home from school, yet the sale of alcohol to minors has always been prohibited. All that was needed to keep kids away from booze was to enforce the existing law.

People who enjoy alcohol will always find a way to drink. Leaving in place ridiculous regulations that facilitate extortion will drive them to it.

Thailand already has many world-class laws; the trick is to see that they are enforced. If efforts are not ongoing, the ghost of Corruption Past will come back to haunt us for sure.

Keep the Phuket cleanup ball rolling, take down jet-skis next