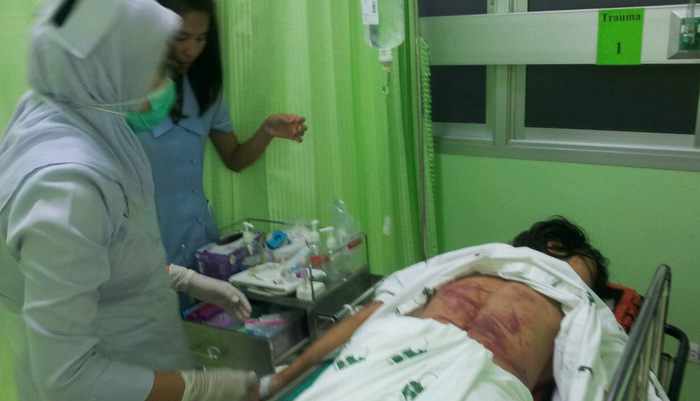 PHUKET: The man wanted for beating his female partner and hacking the back of her neck with a machete in central Phuket two weeks ago has surrendered to police.

Mr Thikamporn’s girlfriend, Amporn Parawech, 23, dragged herself into a neighborhood store near her rented house in Thalang late on June 15 begging for help.

She had suffered a deep cut to her neck and had multiple cuts and bruises on her back (story here).

Mr Thikamporn told police that he had become enraged when Ms Amporn flirted with another man via the online messaging application Line.

“The suspect claimed that Ms Amporn kept ignoring him and prior to the the attack had stopped talking to him entirely,” Lt Col Sanit Nookong of the Thalang Police told the Phuket Gazette.

“He said that when he came home that day, he saw her smiling while using her phone. He asked her who she was talking with, but she ignored him. This made him angry and they started to argue.”

About half an hour later, a jilted and jealous Mr Thikamporn picked up a machete in the house and began striking Ms Amporn on the back, he confessed in his statement to police.

Mr Thikamporn also admitted that he had pressed the blade against the back of Ms Amporn’s neck, but claimed he intended only to threaten her.

“He said that she moved, which caused the blade to carve a gash in her neck,” Col Sanit said.

“Mr Thikamporn said that the sight of blood on her shocked him, and that he left to hide at his parent’s house.”

Officers have questioned Ms Amporn, who admitted that she was chatting via Line when the argument erupted, said Col Sanit. He declined to give further information.

“Mr Thikamporn was charged with attempted murder,” Col Sanit confirmed. “He did not request bail, and is now at Phuket Provincial Prison awaiting trial.”