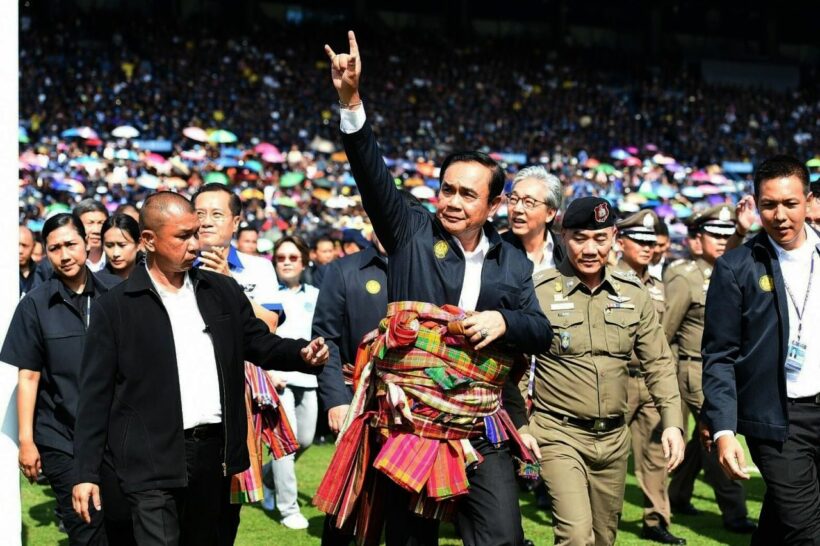 Today is the fourth anniversary of the NCPO (National Committee of Peace and Order) coup which overthrew the elected Yingluck Shinawatra government in 2014.

At the time it was claimed that the coup was necessary to stop Thai protesters harming each other and ‘to bring happiness back to the people’.

General Prayut rode into the capital, Army in tow, on a wave of nostalgia about ‘Thainess’, traditional values and a promise to tackle corruption and systemic problems head on. He even wrote a theme song that was required to be played for the following year on all radio stations each hour.

Having seized absolute power in a May 22 coup d’état, Thai Army chief General Prayuth Chan-ocha has turned to promoting harmony through harmonies – penning a ballad to foster reconciliation in the embittered Southeast Asian nation.

The 60-year-old career soldier, a notorious curmudgeon, has displayed his softer side by writing the lyrics to “Return Happiness to Thailand,” which features lines such as “we offer to guard and protect you with our hearts” and “we are asking for a little more time,” set to music by the Royal Thai Army band. Time.com

On the night of the coup, May 22 2014, all radio stations received a decree to turn off their transmitters. In the following months stations had to re-apply for their licenses with all sort of compliances and paperwork. It took four months and three days for the radio station I was managing at the time to get back on air. Other Phuket stations took up to a year to return to the airwaves. Some never returned.

At the time the NCPO claimed that amateur FM radio stations had been used by red shirt influencers, particularly in the north east of the country, to spread the word of dissent and promote their politics – principally pushing the Shinawatra band-wagon.

The unexpected by-product of this draconian crackdown on the country’s radio stations was to clean up the broadcasting system and professionalise the national radio station bandwidth that would now have to comply with ‘regulations’ – you know, like the rest of the world.

For the next few months, in between hearing the ‘Happiness Song’ every hour on TV and radio, we were told that there would be sweeping reforms, crackdowns and a new national constitution. Four years down the track the NCPO have largely delivered on their promises although there are still plenty of detractors about the Junta’s heavy hand in relation to free speech, free press and a lack of ‘real’ reform (more, some people suggest, re-arranging the political deck chairs on the Titanic).

From an expat perspective, we haven’t seen tanks rolling down the streets, people dragged out of bed in the middle of the night and ‘disappearing’ or overt displays of Army extravagance or show.

Prayut, more of a grumpy uncle than heavy-handed Junta leader, swapped the military uniform for traditional Thai ‘formal’, held nearly daily media conferences, told lemon-lipped foreign ambassadors to ‘calm down’ in their calls for new elections and oversaw the country’s saddest 12 months, when Thais came to terms with the death of the much-loved and revered King Bhumibol.

The instruments may have been fairly blunt and some of the General’s leadership team made their share of naive political faux pas, but, during the past four years, the economy has continued to grow between 3-4.7% each year and tourism, the economy’s largest contributor to GDP, has soared.

With the current PM positioning himself as a potential ‘outside Prime Minister’ if next year’s elections are inconclusive, and the country’s new Constitution being crafted to keep the military as long-term ‘puppeteers’, if not actually fronting the media or emptying the trash, Thailand can probably look back on the past four years as a time of stability, growth, social change and some well-intentioned attempts to root out corruption – not all entirely successful.

PM General Prayut has, generally, brought happiness back to the people, if not by realising all his lofty intentions, by at least stopping Thais shooting each other on the streets of Bangkok and providing a firm hand on the steering of Good Ship Thailand.

Tight security in Bangkok and Northeast ahead of pro-election rallies