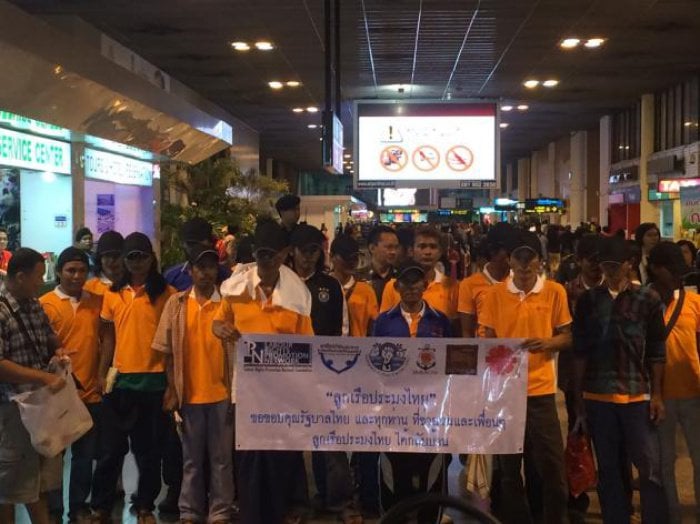 PHUKET: Former prime minister Yingluck Shinawatra yesterday defended her administration after Prime Minister General Prayut Chan-o-cha claimed that it did nothing to solve human trafficking or forced labour on trawlers.

Yingluck posted a message on Facebook saying her administration had taken the issue seriously and perhaps Prayut had not been informed about the matter by government officials.

She said his comments in a recent interview might be the result of “a misunderstanding because [he] has a lot of duties so he didn’t have time [to find out the true facts] or because officials did not have time to explain it to him”.

Yingluck said she had to defend herself and her administration in order to prevent a wider misunderstanding domestically and internationally.

Prayut commented after the media revealed that more than 20 Thais had been trafficked and used as forced labour on trawlers and found themselves trapped on a remote island in Indonesia. The prime minister vowed to make human trafficking suppression a national priority.

He said during his weekly TV address to the nation on Friday night that Thailand’s fishing industry had been plagued with human trafficking problems over the past 10 years, which must be seriously addressed.

Yingluck said her administration had always taken the issue seriously.

She said that in 2013 Thailand was upgraded in the United States’ Trafficking in Persons report due to her administration delivering a clear plan to tackle the problem.

“The government held several meetings, with either myself as chair or [former] Deputy Prime Minister Phongthep Thepkanchana as chair on my behalf, and a small working group was set up to tackle specific problems such as [trafficked] trawler boat workers,” the former PM said.

Yingluck said that in December 2013 her administration’s efforts to tackle the problem resulted in it being praised by senior US diplomat Luis CdeBaca, who is US Ambassador-at-Large to Monitor and Combat Trafficking in Persons.

She added that her administration had compiled the results of its anti-human trafficking work, both quantitatively and qualitatively, adding that 1,300 centres were set up throughout the Kingdom during her tenure to hear complaints and deal with human trafficking.

However, she said human trafficking could not be eradicated overnight.

In a related development, relatives of freed forced trawler workers welcomed home their loved ones at Don Mueang Airport on Friday night.

Yuparat Yothasri, 50, a native of Kalasin, said her son Wuthichai, 30, sought work on a trawler in Samut Sakhon due to poverty and until this week she had not heard of him since 2011.

Some 26 Thais caught in forced labour were rescued and returned to Thailand on Friday night. They are temporarily being sheltered in Pathum Thani for questioning.

Ten more “rescued” Thais are still on Ambon Island in Indonesia – six of them scheduled to return on Wednesday.

A large number of Burmese are reportedly stuck on other islands in eastern Indonesia.