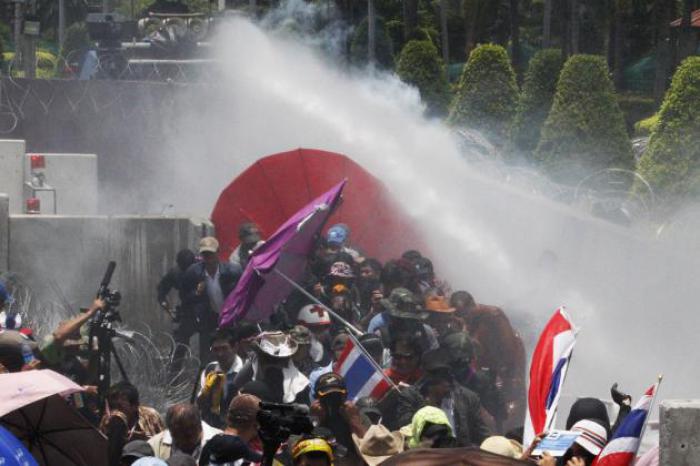 PHUKET: Police guarding the government’s Centre for the Administration for Peace and Order (CAPO) fired water and teargas at anti-government protesters and senior monk, Phra Buddha Issara, who led Friday’s protest to the Royal Police Club, where CAPO is housed.

The monk, who has supervised the rally camp on Chaeng Wattana road for several months, walked unarmed to the entrance of the Royal Police Club. The door however was blocked with cement barriers and barbed wires. Police warned the monk as he walked towards the gate that his demands and activities were illegal. The monk resisted and continued his approach only to be fired with a water cannon followed by tear gas.

He was whisked away by his security guards. He was seen suffering from eye irritation caused by the teargas. Five protesters were injured by the teargas and sent to a nearby hospital.

In the afternoon, the monk retreated to the Chaeng Wattana camp after being informed that a group of red shirts were trying to dismantle his stage.

Rights groups call for US sanctions against Thailand over trafficking